Pride In London to honour emergency services in the parade 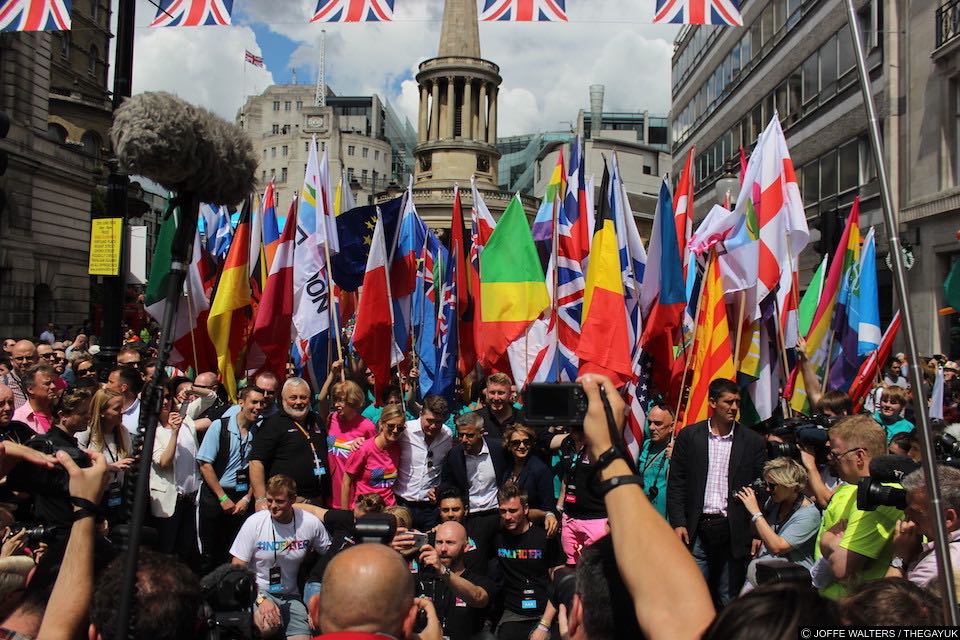 The Pride in London Parade will today (Saturday 8 July) be officially launched by members of the emergency services in honour of their commitment and bravery in recent tragic events.

London’s Fire and Rescue service, the Metropolitan Police and London Ambulance service are all nominating LGBT+ colleagues to officially open the Pride in London Parade this Saturday 8 July at 1pm. Those LGBT+ colleagues who were involved in the recent Grenfell Tower fire tragedy, the London Bridge terror attack and the Westminster terror attack will be joined by the Rt. Hon. Lord Mayor of Westminster, Councillor Ian Adams, Mayor of London Sadiq Khan, members of the volunteer-run Pride in London board and flag bearers showing flags from countries around the world – in particular, the 72 countries where it’s still illegal to be LGBT+.

Marking 50 years since Parliament first voted to partially legalise homosexuality in the UK, which applied to England and Wales only, Pride in London will be marching with a global message of hope, acceptance, activism and love and in a show of solidarity to LGBT+ people living in Northern Ireland which has yet to legalise same-sex marriage. The theme Love Happens Here is a much-needed antidote to hate and the Parade will be a protest against hate. A recent hate crime report showed nearly half of LGBT+ people in London say they’ve experienced hate crime compared with a national figure of 18%.

With over 330 groups including around 80 floats, the Pride in London Parade is set to be the biggest and most colourful yet as it shuts down Regent Street, one of Europe’s busiest shopping streets. An estimated 26,500 people are due to take part in the Parade and there is expected to be 1 million people attending Pride, making it London’s largest single day outdoor event. Over 60% of parade groups are non-profit and community groups with others including LGBT+ employee networks, religious and political groups, trade unions and musical and sporting organisations.

The Parade will be the pinnacle of what is believed to the be the world’s largest Pride Festival – with well over 100 events since Saturday 24 June, and will officially close on Sunday 9 July, where awards for best new group, best walking group and best float amongst others will be announced at Pride in the Park with UK Black Pride at 4:15 pm on Sunday in Vauxhall Pleasure Gardens.

Organisers are urging anyone attending to plan their Pride for the best possible experience by downloading the official Pride in London app and visiting the Pride in London website at prideinlondon.org for all the key information.