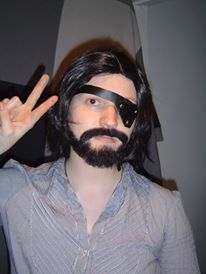 Who Are You?
I’m Annette. I’ve been cosplaying for 15 years, and I cosplay characters of various genders, but I do particularly enjoy the opportunity to cosplay male characters.

Why and when did you decide to become a Drag King or do FTM Cosplay?
Early in my cosplaying days, I did a lot of group cosplay with a certain group of friends. The women outnumbered the men in the group and I was asked if I would take on some of the male characters. Having been involved in drama a lot at school, including my time at an all-girls’ school, I had performed male roles before and didn’t mind. After doing it a few times I realised I was often more comfortable in those roles and it led in part to my realisation that I was genderfluid.

Do you have a favourite character? (Why is he your favourite?)
I performed at Jack Sparrow for a number of years. He was glorious fun to perform as; I’m not a very confident person in myself most of the time, but having a character that was so flamboyant and outgoing gave me the opportunity to take on those characteristics myself. It was Jack Sparrow’s confidence that helped me to make a move on my current partner, who I have now been with for over 10 years.

What attracted you to dressing and performing as a male character?
As I grew up I was never interested in the stereotypical female roles for imaginary play; I couldn’t understand why anyone would want to be princess sitting around in a castle when you could be a prince who went out slaying dragons! Eventually, partially through cosplay, I realised that although I had a female body, I was genderfluid, and performing as a male character allows me to express that in a safe space. I also enjoy the aesthetics of male clothing, specifically historical styles and fine tailoring. I cosplay female characters as well, often quite highly sexualised ones, but they can make me feel very vulnerable about my body and the attention it draws; with male characters I always feel very safe and comfortable.

Why do you think Drag Kings/FTM cosplayers are usually ignored in favour of Drag Queens MTF Cosplayers?
There’s definitely a visual aspect to it. Overall, men’s clothing is much more restricted and less visually impressive than women’s, and it’s much harder to make exaggerated and theatrical for drag. The colours tend to be more sombre and patterns and other noticeable visual detail is rare. Even in cosplay, the male characters are rarely as detailed and fancy as the female (a common complaint amongst male cosplayers who aren’t necessarily willing to crossplay). There’s also a sense that it’s much more common to see women in what was historically “male” clothing, like suits and trousers, so there’s less of an impact than you get with a man in a dress.

What would you like the world to know?
That we need to worry less about conforming to gender stereotypes and judging those who don’t; there are much more important things to worry about than telling a man he shouldn’t be wearing a skirt!
And that cosplay is for anyone who wants to try it; in fact, within the community itself there’s a lot more acceptance of people cosplaying outside their established gender and cons and cosplay can often be a safe space to experiment with cross-dressing and cosplay.