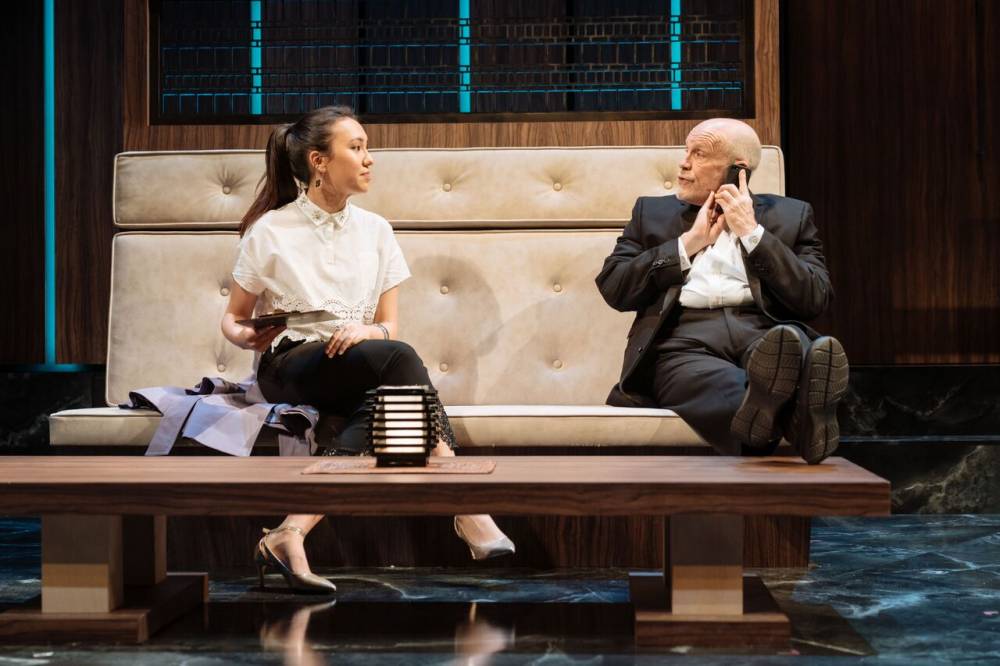 John Malkovich and David Mamet attempt to tell a story about a Hollywood mogul and his downfall but it falls completely flat in the new West End Show Bitter Wheat.

Malkovich, star of screen and stage (70 films in total including Empire of the Sun and Burn After Reading), and playwright David Mamet (Glengarry Glen Ross, Speed the Plow) are where the blames lie in a show that tries to deal with an issue that is very timely but in this stage production is poorly executed. Malkovich is super-rich movie mogul Barney Fein who thinks and makes decisions with his nether regions. All likeliness to Harvey Weinstein is purely coincidental (!!).

In this satire that is far from funny, Fein’s life is managed by his loyal assistant (Doon Mackichan).

He even relies on her to get a gift for his mother’s birthday (his mother owns the company) – strangely the same scarf she got her the year before. And then there is another assistant (Alexander Arnold) who has no other function then just to walk in from time to time (including at the end where he announces that there is a man with a gun in the lobby – the same man who kills Feins’ mother in the second half – not shown) – all very silly and unbelievable. But before we get to this we are witness to an attempt by Fein to get young British-Korean actress and Cambridge grad Yung Kim Li (Ioanna Kimbook), who’s flown in to meet him, into a sexual liaison (all she wants is to eat after a long flight).

Fein first asks her for a massage, and then finally asks her if she would watch him take a shower.

It’s all very creepy and weird. And the show, at only 110 minutes long, (it also has an interval,) continues on a downward spiral that becomes shockingly dumb and just as quick as Weinteins’ downfall. Malkovich is just not convincing enough and delivers his lines like he’s reading them, while Mamet, who wrote and directed, knows better than to stage a show this bad.

Avoid at all costs.