Vienna has a reputation for music and culture, trust me, you’ll hear a lot about Mozart and Beethoven while you’re there, and it’s that cultural appeal that draws in a lot of gay travellers like yourself. But there’s more to Austria’s capital than just museums and art.

How gay-friendly is Vienna?

It’s usually a good sign that a city is gay-friendly when the tourism board has a dedicated gay travellers page on their website.

Vienna is incredibly gay-friendly, with gay couples walking comfortably hand-in-hand and LGBT rights assured across the board. Gay marriage, gay adoption, all these rights are protected by the Austrian government despite the influence of Catholicism that once dominated the country. They host their own Pride parade, as well as being home of the Euro Pride celebrations 2019.

This isn’t a city that will leave you feeling like the only gay in the village as there’s a thriving LGBT population that are out, open, and welcoming.

I was lucky enough to visit Vienna during EuroPride 2019, meaning the entire city was transformed into an open-air gay bar; swarming with international lovelies alongside enough gorgeous locals to make your Grindr overload.

However, for the rest of the year there are still plenty of gay venues to chose from, despite the fact that Vienna doesn’t have a dedicated gay neighbourhood.

Located on one of the oldest streets in Vienna – the Tiefen Graben – WHY NOT is a relatively small gay club that’s something of an institution in Vienna, having been around since 1980. Open every Friday and Saturday, WHY NOT plays popular house and dance music with 3 bars on 2 floors, and even a pole-area… just in case.

Pitbull, Vienna’s first bear & butch club, opened in 2009 and – in their words – provides sweat-producing beats for that pure testosterone rush. While some of that may have been lost in translation, it still sounds filthy and fabulous.

Museums and operas, oh my

If you’re not into the scene, there’s still a load of gay-friendly activities to keep you occupied during your visit. The cultured gays of the world will feel right at home in Vienna with plenty of museums and galleries to visit, as well as the State Opera and the Volks Opera for those looking to experience some of the world’s best opera performances.

Even if you’re not super into art or history, the MuseumsQuarter is definitely worth a visit, and the Kunst Haus Wien museum is known to show LGBT exhibits and artists such as Mapplethorpe and Pierre & Gilles.

The best time to visit Vienna

We visited Vienna at the beginning of June and we were sweating our balls off! The best time of year to visit Vienna is typically April to May or September to October, either side of the intense heat of the summer months. Plus higher temperatures tend to bring with them higher prices along with even more tourists.

So if you can avoid the busier summer months I would recommend it. That being said, the summer sunshine is great if you want to swim in the Danube and strip off at the beach.

Yes gentlemen, there is a nude beach right smack in the middle of the city, on the shores of the Danube River itself. 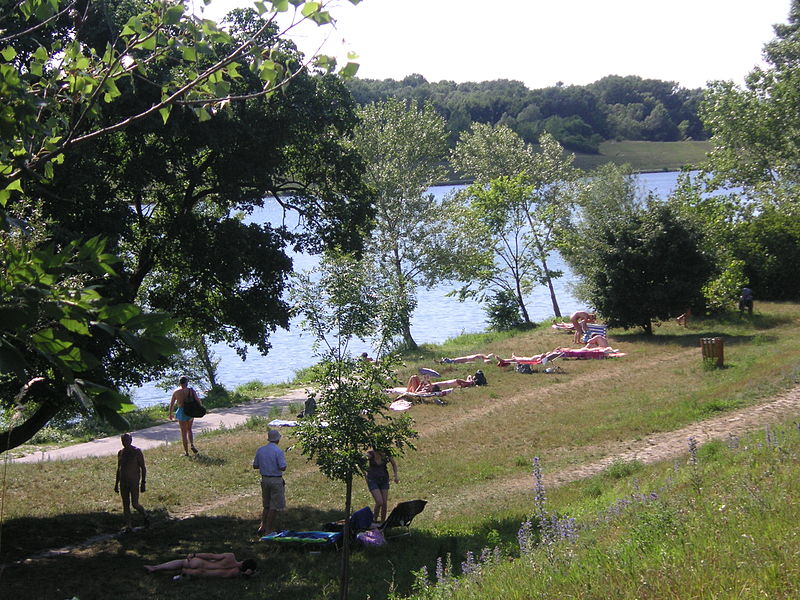 Donauinsel (Danube Island) is a long narrow island in central Vienna, between the Danube river and the parallel channel Neue Donau. Nude sunbathing is permitted on both sides of the Neue Dona, starting from Steinspornbrücke and ending at the southeast end of Donauinsel.

It is not a secluded beach, so this is not the nude beach to visit if you’re shy. Expect to get glances from the 190,000 visitors that come to Danube Island, not to mention the swathes of tourists that sail along the river itself (some might even take a few pics… not that we would ever have done such a thing).

FKK (pronounced ‘eff-ka-ka’) is written on the roads to guide you to the right spot, it’s printed on a sign or stenciled on a wall or sidewalk indicates freikörperkultur or nudist area. The area directly across from the marker on the Donauinsel is also designated as a gay beach on many maps.

There are even some restaurants on the dam where you can eat and drink without having to put your trunks back on.