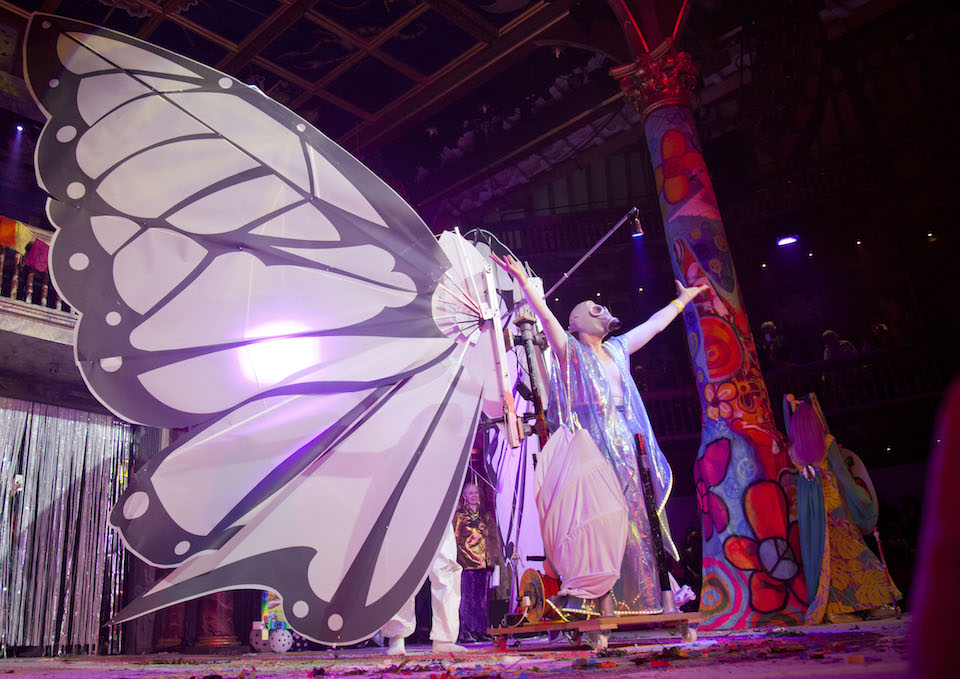 Do first impressions count? Oh yes, darlings, more so now -in the wake of Trump’s horrifying assault on anything remotely extranormal – than ever before! So how sweet, edifying and redemptive that there’s the gorgeously queer, counter-cultural energy of Andrew Logan’s simply awesome Alternative Miss World still in existence, a glittering beacon of extravagant diversity personified!

Never heard of Mister/Missus Logan? No? If so, that’s simply shameful, on a shockingly uninformed par with an NYC queen in his 30s I met last year who’d never. heard. of. Quentin. Crisp! Understand, I’m not mocking the genuinely unenlightened or unaware, but Christ, in this current tsunami of unprecedented prejudice, queer history is a vital foundation of effective resistance!

So – without further ado – let’s spotlight the gloriously ambisexual (in appearance, at least) Andrew Logan, a globally acclaimed queer sculptor in fragmented, rainbow-rayed glass, who’s organised. conceived and manifested his Alternative Miss World – a celebration of every possible form of imaginative deviance – since 1972.

Now, many of you readers, of course, were not even born until decades after that pivotal date, but – to quickly illustrate the psycho-sexual climate then, on your behalf – it was the peak of glam-rock, with the omnisexual Bowie’s Ziggy Stardust album definitively shredding the social rule-book for lumbering, brain-dead cock-rock.

Being an ancient tranny-granny, of course, I remember it well, enhanced by the shared memories of my equally non-binary creative and performing partner, Camilla. Seizing the furious, spitting lightning of Bowie’s gender-blending zeitgeist – which would later manifest more lumpenly the following year with the Rock Horror Show – Logan tore apart the Freudian gates of self-repression, and let panting, polymorphous perversity rule!

You think the gay, non-binary and trans scenes are wild now? Well, sweethearts, we’ll gloss over the nude waiters, heaped platters of coke and dwarves employed for recreational excess at a certain Queen launch party, and just simply reiterate – quite mildly – that the 1970s was an era of stratospheric debauchery that even dear, damaged Caligula may have smirked at!

Still, back to La Logan, and his peripatetic, occasional and irregular spurts of eroticised pageantry. If never a strictly fixed signpost on the gay, social calendar – indeed, one that often went missing inexplicably and unpredictably years at a time – Logan’s actual, physical cavalcades, when they occurred, were a wake-up call for every struggling, self-actualised sexual revolutionary on the entire planet! Frankly, through the years, Camilla and I have been greeted and treated to lusciously mind-bending pageants of any possible iteration of the LGBTQI alphabet, and tonight – at Shakespeare’s Globe, the jarringly staid bastion of theatrical respectability – is no exception.

So let’s set the scene. Placing our cushions – mature butts do require some comforts, dear readers – on the Globe’s unyielding wooden benches, we gazed down at the raised stage in a vast courtyard wholly open to the chilling, October air, the only protection for performers from England’s unpredictable elements a jutting, over-stage roof supported by huge columns awash with glowing, ultraviolet, psychedelic hieroglyphs.

And why not? Logan’s theme this year – quite appropriately, in a shockingly divisive political climate – was Psychedelic Peace. As a clarion call and rallying point for sympathetic spirits and resistance, it’s way overdue; who needs the frothing inanities of Brexit-crazed xenophobes and Trump’s ecstatic elevation and fawning worship of decrepit misogynists?

Not us, but mercifully, tonight, overwhelmingly, was dedicated to the complimentary, healing spirits of boundless compassion and tolerance. Fittingly, the Peace Envoy – spearheaded by indefatigable cabaret veteran, Eve Ferret – streamed onstage in all their stalwart, sexually non-judgemental glory. Their names, of course, are instantly recognisable to anyone with even a barely tangible acquaintance with cutting-edge, queer culture; the fiercely sensual Bishi, the living work of art in progress Daniel Lismore, activists Olga Lamas, Roy Inc and Stuart Hopps. More unexpectedly – for audience members of our vintage, at least – were the impeccably queer credentials of the rangily charismatic Jenny Runacre, the iconic, Elizabeth the First in Derek Jarman’s Jubilee, and the predatory bisexual Miss Brunner in the cult, cyber-noir thriller The Final Programme, and here hugely owning her maverick, outsider glory in a clinging, sapphire dress and wickedly insouciant shades.

And right here at Shakespeare’s Globe – and maybe nowhere else on the planet at those precise moments – a startlingly tangible wave of queer solidarity echoed the mass meditation evoked on stage by Angelika Grohamn. The point – made inescapably clear – was saying and offering a huge, plump, collective ‘yes’ to all those previously forbidden and downtrodden lifestyles, desires and yearnings, here given fabulously unrestrained wings as a scorching, definitive take on the Rocky Horror’s once courageous, but still irritatingly mimsy credo, ‘Don’t dream it; BE it!’.

And did the contestants embody and live up to Richard O’ Brien’s timid, hardly full-bodied call to excess? Oh bleeding, gorgeously masochistic Jesus on the cross, yes! Okay, perhaps, the increasing cold, bodily discomfort and sustained, mental shell-shock of non-stop, successive peaks of ravishing outrage made objective reportage and appreciation almost impossible – curse those frequent, swollen-prostate bathroom breaks! – but many life-changing moments simply scalded themselves in our minds!

And who – in their right or wrong minds – could fail to be conceptually pole-axed by the simply belief-confounding Miss Lysergic Acid? Entering propelled on a discrete, wheeled camera dolly, her glittering, metallic robe incandescently piped by electric-lit borders, Miss Lysergic Maximus – our preferred name for this psychedelic prodigy – unfurled vast, ethereal, violet butterfly wings while lip-synching to the transcendent yearning of Puccini’s masterly aria, ‘Nessun Dorma’.

Ever wanted to relish live, human sacrifice? To share – even if only vicariously – the mass homicidal, proxy orgasm craved by ancient, Roman circus punters?  Tough. Miss Psychic Timebomb – plainly dressed by contrast to others in a white gown, Venetian mask and attached to a huge, rigid disc of white chiffon – didn’t quite die for the audience, but courageously, plunged like a passive, living offering into the crowd, to be buoyed – in an astounding exhibition of trust – by his/her white-quiffed accomplices, wreathed in unexpected clouds of smoke detonated by his/her other compatriots.

‘Ever get the feeling you’ve been cheated?’ Johnny Rotten – the decaying, Botticelli angel of disadvantaged rage – once memorably sneered, but not here, darlings! This, indisputably, was Anarchy in the UK indeed, an overdue, furiously chaotic, punk-rock fuck-you to the staggering, staged boredom epitomised byStrictly, the X-Factor and West End theatre en masse!

That blanket unpredictability – the heady, off-kilter thrill typifying the Stingray, kid’s TV show tag – ‘Anything can happen in the next half-hour!’ – injected the entire night with a spontaneous, pseudo-Ecstasy rush from moment one. And- unbelievably – there was more to come, the writhing, au naturel and wholly naked exuberance of the Neo Naturist dance troupe, all body paint and extravagant, decorated genitals, radiating an unapologetic miasma of human sweat and sexual musk.

Tasteless? Only to people metaphorically sealed, bound and taped in every orifice, to minds screamingly allergic to and repelled by every aspect of the blatantly sexual human animal, and to the bigoted hatred of unevolved fanatics who, inexplicably, idolise invisible, unprovable sky-guys floating on clouds rather than unconditional human love and compassion.

Originating in the early 1980s as an earthy riposte to Thatcher’s dehumanising ethos of ruthless, pan-social greed, the Neo Naturists – free-form dancing to Hawkwind’s joyously delirious Silver Machine  – writhed like living art in nothing but marine green and rain-forest emerald body paint, a luscious and necessarily lubricious reminder, that – beneath our often cynical and socially enforced masks – our bodies change, age and orgasm at the dictates of nature, time and sexualities beyond our control.

Their choice? In the immortal words of Duncan McCleod’s iconic movie hero Highlander, ‘There can be only one!’, and – unsurprisingly – it’s Russian zeitgeist grandmaster Andrey Bartenev, irresistibly resplendent in a linked cloud of doll-face printed helium balloons, gathered in front of his body into a shockingly gigantic – and shockingly elegant – erect, black and white, diamond patterned penis and pendulous balls, making ravishingly demonstrative love to the entire audience!

How, pray tell, can anything top clouds of conceptual semen sprayed indiscriminately in public? While one should never underestimate the infinite, potential shock-troop outrages brewing in the minds of future contestants, Bartenev’s imaginary fire-hose of sassy, perfectly-formed, mass sexual charity drenched us all in lingering, consensual joy. Frankly, we can’t wait for more, and the inevitable, future crowning of Andrew Logan as Queen Deviance personified!