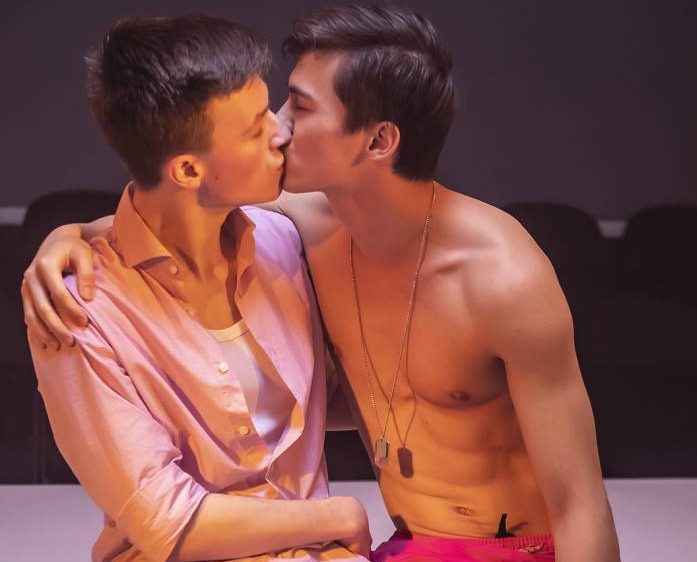 A father and son take an adventure of a lifetime in My Dad’s Gap Year.

Now playing at the Park Theatre in Finsbury Park, My Dad’s Gap Year is a hilarious comedy about a father trying to bond with his conservative gay teenage son while going through a mid-life crises. Dave (Adam Lannon), dad of 18-year old William (Alex Britt), feels it’s time for them to sow their wild oats. But uptight William is not so wild, he frowns upon everything his unemployed dad does, which includes lying around the messy house not being productive. Meanwhile, William’s mom and Dave’s ex wife Cath (Michelle Collins), being the sensible one, holds a full-time job while maintaining an arm’s length relationship with Dave. But when Dave, at the very last minute, persuades William to go with him to Thailand for some father and son bonding and fun, them, and Cath, have no idea who sort of adventure, and trouble, Dave and William will get into.

But once in Thailand, William meets cute architect Matias (Max Percy), while Dave meets beautiful Mae (a lovely Victoria Gigante). While Williams falls head over heals for Matias, Dave does the same for Mae, who works at a bar where all the ‘women there were born boys.’ But Dave’s drinking problem never goes away, while William has his own personal meltdown, leaving Cath to go to Thailand to do damage control.

My Dad’s Gap Year is a fun show with a great cast. At only 90 minutes, it’s crisply directed (by Rikki Beadle-Blair) with funny dialogue and actors who deliver their lines perfectly. And while the show wraps up a bit too neatly at the end, all the actors are very good throughout. Lannon is very good as the father, Collins gives the show extra spark, but it’s Gigante who is extra special as Mae, a girl who just wants to have a happy life.