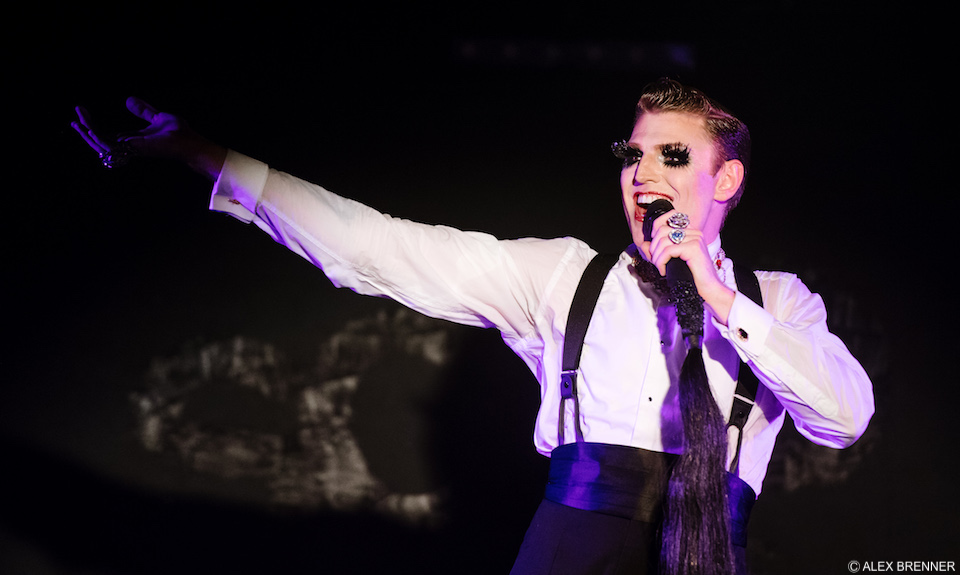 Never heard of Reuben Kaye? You will! Sick, slick, as gorgeously filthy as a pouting penis, Kay’s a living bigot’s nightmare, spunking left, right and centre over every sacred cow possible! Think a Dale Winton on acid, but – thank f*ck -one blessed with the chiselled, Greek-statue perfection of a 1950’s beefcake idol. Yes, this face, this presence, this glorious insult personified, is the joint king and queen of Australian cabaret, briefly condescending to take one awesome, comic dump on the UK’s half-starved notions of hilarity.

Bursting on stage like some Satanic, lobster-red supernova awash with sequins and buoyed on precarious platforms, Kaye immediately sucks up every fraction of potential ridicule from tonight’s blackly comic zeitgeist. Like some fantastical Shirley Bassey reincarnated as a ripped gay ninja, Kaye’s scorchingly weaponised his scattergun satire, raising it – quite effortlessly – to the status of a lethally funny martial art.

But, WTF? Let’s backtrack one moment, because frankly, context is everything, so pardon my presumption while I pump you full of backstory! In common with his closest, possible rival, the inexplicably ubiquitous but dramatically tepid Dusty Limits, our Reuben’s a gay Aussie, but – and it’s a huge butt – the comparisons stop right there. If Limits seems content to peddle mildly risque double entendres like some Poundland Julian Clary, Kaye is a living menage a trois, a one-man queer, Holy Trinity, the three queens of Priscilla compounded in one fabulously provocative presence!

No wonder, then, he’s enjoyed rapturously received residencies at London’s Savoy and Rosewood hotels, in addition to constant bookings worldwide. And tonight – fittingly – he’s on brilliantly non-PC fire. His advice on drugs? Try them on someone else first, and if they’re still alive in an hour, do them, drugs and asshole! And he skewers the pitfalls of drug-f*cked sex perfectly: ‘Doing it doggy-style? Maybe turn around once in a while, check that it’s still the same person you started with!’.

Get the picture? Yes, nothing and no one’s safe, especially the audience. ‘Ohh, I’d like you to clean my dildo’ Kaye quips to a shell-shocked punter, ‘I can literally feel your arsehole clenching in fear’. Christ, screw priests, parents and anguished, clueless counsellors- a Kaye a day keeps a gayboy at play! And forget Trump on Twitter -nothing escapes Kaye’s killer, cultural scalpel. ‘Consent? A term unknown to straight men…’. Too true, but there’s also praise for supernatural sluttishness; ‘Jesus – I love a man who can be nailed for three days straight and come back for more…’. Well, don’t we all, and Kaye’s scathing tornado of sexual surrealism is like first-time penetration – give in, and you’ll love it! Where else could a mutual love of Grace Jones and civil rights get mashed-up as ‘12 years a slave…to the rhythm?’.

Exhilarating? You bet, and sure, Reuben gleefully slaughters three furiously sacred cows – racism, sexism and homophobia. Still, unlike the far fiercer David Hoyle, Kaye never critiques or challenges the LGBT moral axis underpinning his whole act. If brash, apparently fearless and flamingly flamboyant, Kaye shrewdly avoids any lurking, intersectional minefields of identity politics. And ironically, though he spits bile, venom and shade in a virtuoso blizzard of genderqueer radicalism, Kaye’s comedy is hamstrung by the binary assumptions he conforms to, but also attacks.

So, unfortunately, in 2018, Kaye’s keynote, us and them stance is completely irrelevant to gender-fluid millennials like Cara Delavigne and St.Vincent, who see pansexuality as just another box to be ticked in today’s current, sexually unbounded pleasure menus. Oh, don’t get me wrong – Reuben is, by far, the most brilliant avatar of his chosen cul-de-sac, but his brand of oppositional comedy depends on totally punctured paradigms, and he’s been made obsolete by changes in gender discourse itself.

But, who really cares? Who the hell goes to a comedy show seeking philosophical enlightenment? Sometimes- as Sigmund Freud once said -‘a cigar is just a cigar’, not a blatant penis metaphor, and sometimes, killer comedy is f*cking hilarious, whatever the subtext! So, let’s give a big hand – with optional, rectal consent – to Reuben Kaye, the living Shakespeare of confrontational cabaret. Comedy really doesn’t get any better than being mentally masturbated by a tall, dark stranger!

At the Soho Theatre in London until the 16th June 2018