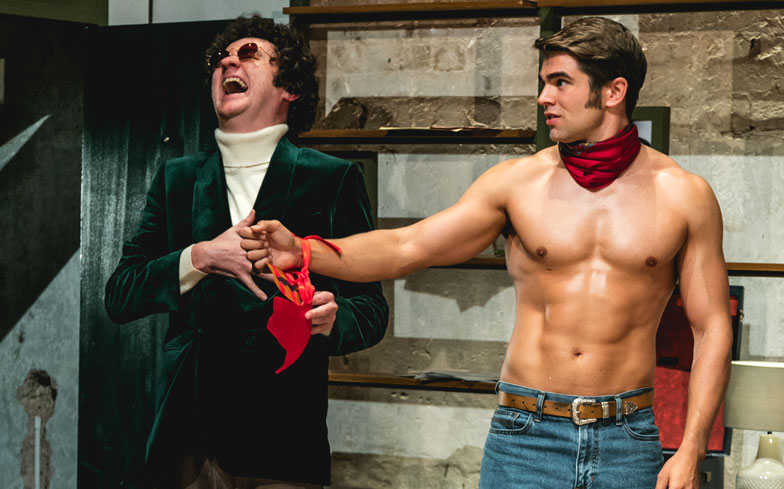 ★★★★| Set in Brooklyn in the late 1960’s , nine gay men gather in an apartment to celebrate a friends birthday. Michael is an alcoholic shopaholic, Harold is a self-depreciating “Jew Fairy” (as he describes himself), Larry and Hank are a couple trying to make their differing views on monogamy fit together and Emory is as camp as they come. Throw into the mix a rather attractive, but dumb, cowboy hustler, a closeted testosterone filled ex-college roommate and copious amounts of booze and pot, and it’s not long before lives unravel, tempers fray and a cruel party game emerges.

This long overdue revival of Mart Crowley’s classic play is most welcome, and whilst it is no longer as shocking as it was in the late 1960’s, the relevance and impact still resonates today; as, sadly, do the undertones of self-loathing and internalised homophobia. The range of characteristics on show from the main protagonists may seem slightly cliché now, but still manage to reflect a number of the sub groups within the gay community and the issues facing them. The first act is a rather whimsical affair, as the characters arrive and you get to know them, but as the second act progresses, the narrative takes a darker turn, leading to a gripping dénouement.

The cast is strong all round, with solid performances from the ensemble, particularly Mark Gattis (Sherlock, Doctor Who) puts in an effortless performance as Harold, filled with subtlety and natural aloofness. Ian Hallard (Poirot, Doctors) holds the cast together as Michael, and James Holmes (Miranda, Psychoville) is delightful as Emory, brimming with campery and confidence. And whilst Jack Derges (Andy Flynn in EastEnders) is a vision of physical perfection, he proves he is much more than the token eye candy with an enjoyable performance as the dim witted (and mostly shirtless) cowboy hustler.

The set is authentic and beautifully detailed, as are the costumes, but even though the fashions and décor have altered, the issues raised have not; and whilst some of the social impact of the play may have lessened with time, the personal impact hasn’t, and the gay audience will recognise aspects of themselves, their peers and their experiences amongst the events of the evening.

With some sharp one liners, genuine emotion and some top notch performances; don’t miss your last chance to see this this excellent revival before it ends its run. The Boys in the Band is playing at West Yorkshire Playhouse, Leeds, until Saturday 19th November 2016. See www.wyp.org.uk for details.