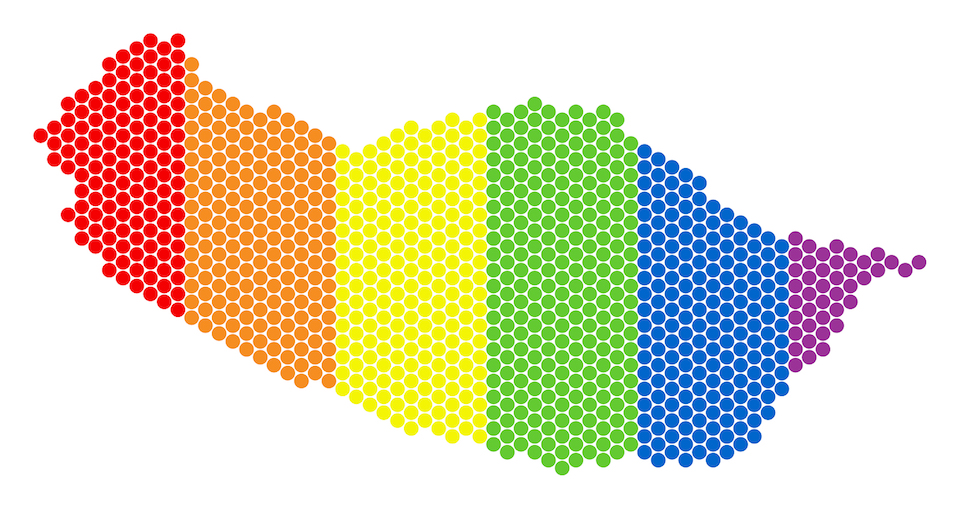 So here are 5 reasons the gays should put Madeira on their list of places to see:

While the majority of passengers on our flight did look like the cast of The Best Exotic Marigold Hotel, there’s more to Madeira than comfortable walking shoes and early bird dinner specials.

So here are 5 reasons the gays should put Madeira on their list of places to see:

Oldies aside, Portugal as a whole is very gay-friendly, and Madeira is no different. On a rainbow flag scale of gayness, I’d give Madeira a green. Gay-friendly but not especially gay-fun. So if you’re only interested in going to gay bars, staying in gay hotels, and “hanging out” with gay locals, then Madeira may not be for you.

There are plenty of gays there, just not in overwhelming numbers or in any concentrated areas. There aren’t any gay bars or even gay nights, but you’ll find a sprinkling of gays in some of the popular gay-friendly venues such as: Venda Velha, 23 Vintage Bar, Mini Eco Bar, Cafe do Teatro, Trap Music Bar, Copacabana Disco, & Escondidinho!

The word the locals I spoke to used a lot was “discreet”. The ageing population and traditionally Catholic background has meant gay life in Madeira isn’t overly loud. They do, however, have their own Pride which is celebrating its second year.

One reason the oldies love this place is its consistently constant weather. Though your guides will mention several times that there are multiple micro-climates on the island, you can be fairly confident to grab yourself some sunshine at any time of the year.

Whether it’s June or January, you’ll still be able to wear short shorts and get a nice tan (unless you’re of the ginger persuasion like myself, in which case you can get a nice sunburn). You’re looking at a range of temperatures from 12 to 19 degrees. So it’s sunny and warm, but you won’t burst into flames (again, unless you’re ginger like moi).

Any location that boasts a Mediterranean climate will come accompanied by luscious Mediterranean food. If you like seafood then book your flights and pack your elasticated waistbands. Tuna steaks the size of your head and the horribly ugly yet incredibly tasty Black Scabbard are local delicacies.

If you’re not the beach resort type, or even if you are and you’ve had enough of lounging around the pool, Madeira’s volcanic nature means there are plenty of stunning mountain trails that you could follow for days.

When you get up above the clouds, the island has a confusingly Swiss feel about it, with some incredibly cute fluffy cows likely to block your path at some point.

Even the hardest heart would have a hard time remaining cool at the sight of these amazingly intelligent and friendly creatures swimming alongside your boat. You’ve probably been on dolphin/whale-watching tours before where they warm you there’s a chance you might not see any when you get out there. And while we didn’t get to see any whales, our trip out in June meant that we were met by both local and migrating pods of dolphins. We were surrounded by roughly 200 of these amazing creatures, all of whom were curious and wanted to find out what we were about.

Guided by marine biologists who were incredibly respectful of the dolphins, limiting the time we spent with them to just 10 minutes at a time and always careful to keep our distance from mamas with their newborns. There are even excursions where you can hop in and swim with them in their natural environment.

That right there is reason enough for me to visit again!

Looking for accommodation deals for Madeira? Check out the latest deals with Hotels.com and Booking.com