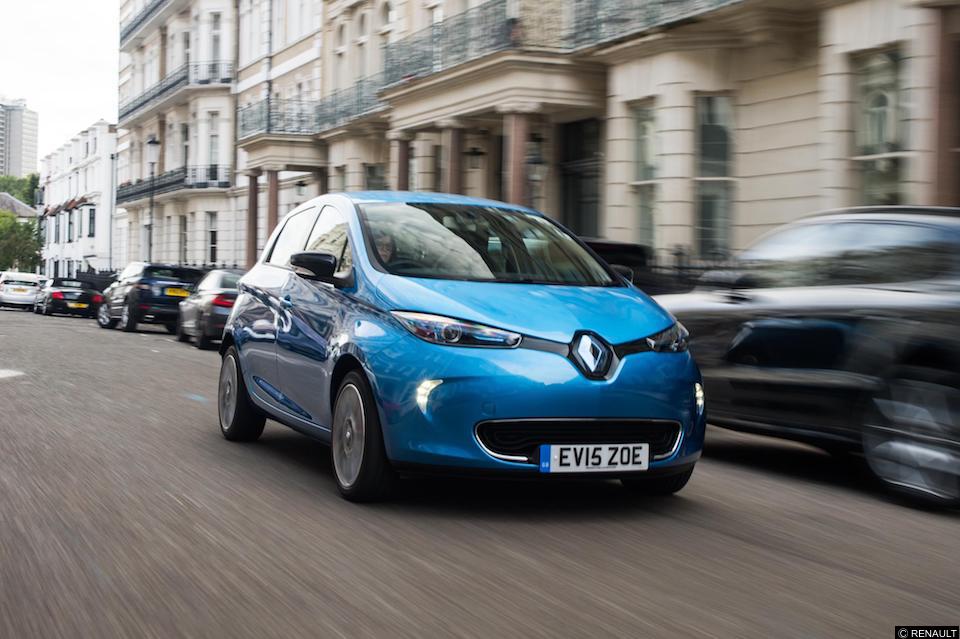 The electric car has seen a significant rise in popularity in recent years. Once seen as the preserve of milk floats and mobility scooters, advances in battery technology have increased range, reduced charging time and made electric vehicles seem a viable option.

The question is how do they perform in the real world? Only one way to find out….

Renault’s Zoe is an all-electric supermini that is around the same length and width as a Clio (they even share a platform) but a bit taller. You wouldn’t call it an MPV or a crossover but you do find yourself looking over the roofs of most other cars meaning visibility is excellent. Thanks to clever packaging of the batteries, motor and other mechanical bits there’s plenty of space inside. Front seat passengers will be able to stretch out and even wear a hat while those in the back won’t be much worse off. It’s no limo but it’s certainly better than you’d expect from this size of car. Open the boot and you’ll be pleasantly surprised again; it’s huge for a supermini although the load lip is a little high and does without a plastic trim. It’s a minor thing but I’d worry about scratching the paint when loading something heavy or bulky. More of an annoyance are the pair of charging leads in bags either side of the boot.

Other manufacturers can hide them away so why can’t Renault?
Style wise I think Renault are onto a winner. There are a few touches such as the blue rear lights and ‘ZE’ (zero emissions) badge that suggests electric propulsion but unlike cars like the G-Wizz or Renault’s own Twizy, these aren’t overt. Instead, you get a nicely sculpted shape that hides its height well. The only angle I’m not keen on is the rear; the feature lines that flank the number plate and lead into the bumper make it look a bit jowly. Inside is light, airy and modern with visually appealing plastics. Sure they’re hard to the touch but then you have to remember the cheapest Zoe is less than £14,000 including a £5,000 government grant. Even the top of the range model barely breaches £20,000. You’d spend an awful lot more on an electric Golf which would be a lot more austere too. At that price, you do need to lease a battery pack at between £70 and £113 a month. If you want to buy the battery outright then add £4500 to the base price.

Renault’s 7” ‘R-Link’ infotainment system works well being easy to navigate, easy to pair a phone to via Bluetooth and lacking any sort of lag other systems sometimes suffer from. Sat-nav is an option but a CD player is not. For me, this isn’t really a problem as streaming music is simple plus you can always use the USB or aux port conveniently placed above a cubbyhole perfect for your media device. Conventional dials have been replaced by another TFT screen which I found clear and easy to use. There’s even a gauge to show you how much juice you’re using and when you’re charging the batteries whilst slowing down. This becomes a very useful tool when you’re looking to maximise the car’s range.

Speaking of range, Renault suggests that on average you’ll need to charge up every 80 miles. In practice, this distance is totally achievable as long as you change your driving style to suit electric power. Gentle acceleration and deceleration is vital as is maintaining your speed where possible. While this may sound like hassle, the reality is that it’s actually pretty relaxing. You soon get used to barely touching the brake pedal, instead relying on the car’s regenerative brakes that harvest energy as you start coasting. What may grate is that air-con and heating take a chunk out of the range; not an issue on short commutes but potentially a worry on longer journeys. Still, chargers are popping up all the time and the most powerful can squeeze 80% of a full charge into the Zoe in 30 minutes.

So what’s it like to drive? Being electric there’s only one forward gear plus reverse with no clutch at all. I suppose you could compare it to an automatic (there’s only a throttle and brake pedal) but with totally seamless acceleration. Performance below 40mph is actually pretty brisk, feeling much quicker than the numbers suggest. Over 40 it does struggle a little as the torque drops off significantly. 70mph is achievable but it drains the battery very very quickly; it’s better to stick to 60 or below and relax. The ride is fairly comfortable although the stiff sidewalls of the low profile economy tyres mean potholes and expansion joints can thump through the suspension into the cabin. There is a fair amount of body roll if you push it hard around a corner but it never feels unstable thanks to the low mounted batteries. You’d never call it fun or involving but it is very competent and not at all unpleasant, perfect for commuting in other words.

With that in mind, it’s commuting that I did plenty of in my week with the car. Renault will supply all Zoes with a fast charger as plugging it into a normal electric socket gives a charging time of 16 hours. Thankfully I had access to a fast charger which ensured the car was always 100% charged at the end of the working day.

In total, I travelled nearly 400 miles and came away very impressed. Only once did I suffer from any ‘range anxiety’ but even then I was able to get to a charger which topped up the battery enough to get me home after less than 45 minutes.

Make no mistake, the Zoe won’t be for everyone. If you need to go more than 80 miles in a day and/or spend a lot of time on motorways then you’re better off sticking to a diesel. For the rest of us – a sizable majority – then the Zoe does make sense. It’s quiet, refined, easy to drive and very spacious while the styling is significantly nicer than the vast number of ‘eco’ cars. If I were in the market for a new supermini, the Zoe would be a serious contender.

Range could still be better

Charging cable storage could be better