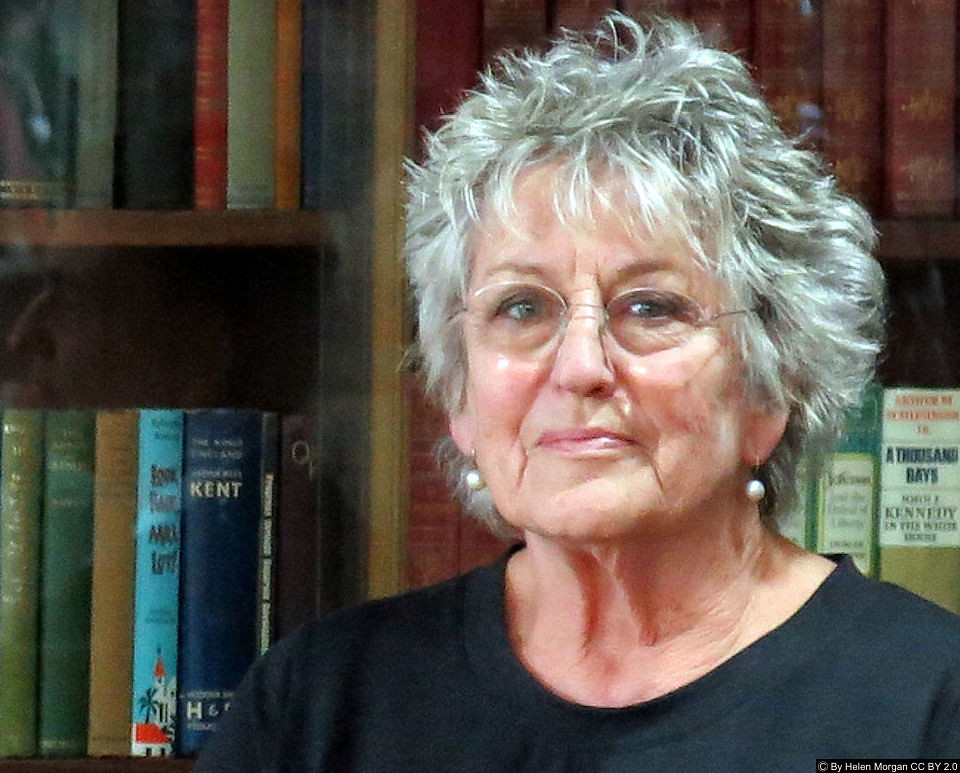 Irony is dead, and Germaine Greer killed it.

Last week, the legendary radical feminist went on Newsnight, the BBC’s flagship current affairs programme, to complain about being no-platformed. She was meant to give a talk about “Women in Power: The Lessons of the 20th Century” at Cardiff University when the student union’s women’s officer, Rachel Melhuish launched a petition to disinvite Greer because she has “demonstrated time and again her misogynistic views towards trans women….” Greer was indignant, indicating she would not speak at the university before reversing course and agreeing to appear as planned. This hasn’t stopped the chattering classes from fiercely debating the merits of no-platforming, with the consensus being that it’s an unacceptable affront to free speech.

They’re missing the point, the lot of them. No-platforming doesn’t infringe on anyone’s right to free speech.

Rather, no platforming is an exercise in free speech. As the feminist blogger Stavvers wrote, no-platforming is a “bottom up” movement where “those who organise events can democratically and transparently decide who to invite, and who not to.” We can choose to whom we listen, which she rightly contends is an oft overlooked exercise of free speech.

Yet critics of no-platforming argue it “censors” controversial opinions—a baseless claim in light of the fact that we’ve spent much of the last week debating Greer’s position on trans people and her right to espouse it wherever and whenever she likes. That’s partly down to the fact that Germaine Greer already has a massive platform. Hell, simply being protested landed Greer right back on the BBC, where she makes regular appearances. So she has plenty of opportunities to speak her mind.

But just because someone has a platform doesn’t mean we have to listen. Earlier this year comedian Kate Smurthwaite’s gig at Goldsmiths College was pulled because of low ticket sales and a student protest. Smurthwaite’s views on sex workers and Muslim women, in particular, were singled out by those against her appearance. Opponents of no-platforming rallied to her defence, leading the writer and long-time opponent of no-platforming, Ian Dunt, to write that “the potential for offence is trumping the right to free speech.”

But this completely ignores the fact that the feminist group which organised the protest was itself exercising its rights. It’s not some Orwellian conspiracy that kept Smurthwaite from performing, but rather the free market. People have a right to choose whom they see, support, or engage with. Even if Smurthwaite wasn’t going to reference sex work or hijab in her performance (the same as Greer wasn’t invited to Cardiff to speak on trans issues), her positions were known and unpalatable enough to spark a backlash—one that worked.

And this is where opponents of no-platforming miss the mark. Freedom of speech does not actually guarantee you a right to a platform, nor does it guarantee you freedom from the consequences of your speech. It doesn’t mean that you can say something incredibly offensive and then expect it to be forgiven or ignored. It, quite simply, guarantees that the government won’t arrest you for expressing a dissenting opinion.

Several years ago, I wrote a blog defending Pauline Howe, a Norwich grandmother who was visited by the police for writing a letter to her local council about “sodomites” like me and our “perverted sexual practises.” Six years later, I still stand by Howe. But I sure as hell wouldn’t share a platform with her, because I’m not interested in debating my identity or equality with someone who clearly disparages the former and denies the latter.

Yet even at 23, I could still recognise that Howe had the right to expressing her opinion without the police knocking round. When I blogged about Howe, I was still a student, a fact that may come as a shock to opponents of no-platforming. Many of them have designated universities as ground zero in the battle over free speech. The ever-enlightened Brendan O’Neill (himself a frequent target of no-platforming) penned a scathing indictment of what he termed “Stepford students” but what I would consider people with better things to do than rehash the previous generation’s culture wars. “Where once students might have allowed their eyes and ears to be bombarded by everything from risqué political propaganda to raunchy rock,” O’Neill whinges, in today’s PC-gone-mad world “the ‘no platform’ policy of various student unions is forever being expanded to keep off campus pretty much anyone whose views don’t chime perfectly with the prevailing groupthink”.

It’s a gross oversimplification, particularly when it comes with no-platforming those who would deny trans identities. When earlier this month both the radical feminist Julie Bindel and, later, the conservative gay writer Milo Yiannopoulos were effectively no-platformed by the University of Manchester’s Student Union(ironically in debate they were to square off in over free speech and feminism), pundits were outraged, with the Telegraph’s Rod Ardehali writing that “it is not up to unions to start creating their own laws and policing which views are acceptable and which are not.”

Except, that is exactly the role of student unions, who are meant to represent the concerns of the students who elected them. The University of Manchester’s Student Union were concerned about some particularly vicious comments by Bindel and Yiannopoulos and the climate their presence (and likely comments) would create on campus. They valued the emotional wellbeing of their trans students over allowing a debate between a couple of cis people with a record of pretty terrible comments on trans individuals (Milo has referred to trans folks as suffering a “psychiatric disorder,” even though this is medically inaccurate). They also, likely, didn’t wish to be associated with such prejudice.

This isn’t an affront to free speech, but rather a democratically elected union doing its job and refusing its platform to speakers it feels do not advance intellectually rigorous or particularly relevant arguments. Universities should be a place for debating ideas, not people, and both Bindel and Yiannopoulos have a history of doing the latter. By no-platforming them, the Student Union are not saying they don’t have a right to speak, but rather that they will not co-sign on oppressive and divisive bigotry by offering them a platform.

Critics contend that Greer, Smurthwaite, Bindel and Yiannopoulos were all invited to speak on issues apart from those for which they were no-platformed, and this is a valid criticism. After all, we are all problematic in our own ways. We are also the sum total of our ideology, though. Writing at the Guardian, Kate Lyons pointed out that for those who advocated no-platforming Greer “it’s not a matter of weighing up the sum of Greer’s work and deciding that on the balance of things she has done more for women than not,” but rather taking a principled stand for transgender people and letting it be known that “as long as she speaks in certain ways about trans issues, she will not be listened to on anything.” Lyons is decidedly sceptical of this approach, but it’s a perfectly valid response to oppressive rhetoric, as well as an excellent tool at highlighting problematic views and drawing attention to just why they’re so damaging and, well, wrong.

That’s the great triumph of no-platforming. Rather than limiting the debate, it is opening it up, but with marginalised voices centred. Yes, Greer still went on Newsnight, Bindel still wrote for the Guardian, and Yiannopoulos is still contributing at Breitbart. Their platforms are intact. But the national conversation being had about trans identities and even free speech would not be happening had a few plucky students not stood up and exercised their own right to speak their minds by saying that “no, actually, we won’t tolerate your intolerance.” So cheers, kids. I’ll share a platform with you any day.