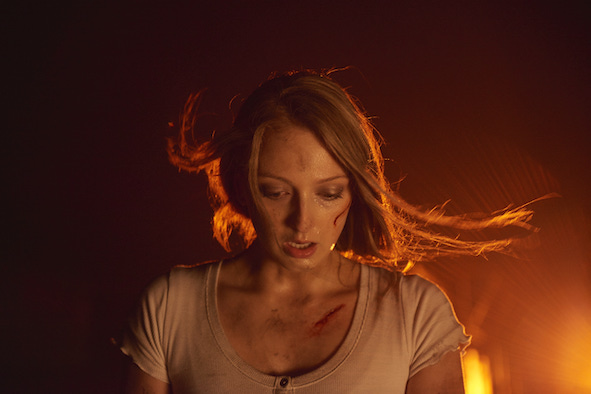 Hey, want to forget all that is happening in our world and go to a Rave? Well, perhaps the new film Ravers is for you.

Why attend an online rave on Zoom where all you see are faces when you can actually watch a real wave (digitally of course), a rave which combines all the right elements: excellent music, being illegal, millennials, drugs, and said millennials turning into zombies.

‘Ravers’ is the wave you crave but it’s also a film with an excellent soundtrack – for real! The story is basic. Poor Bucky (Georgia Hirst), a budding journalist who has not quite found a great great story to write about. And while she’s not the most social of butterflies amongst her circle of friends, she’s convinced to go to an illegal rave in an abandoned factory that used to produce energy drinks. Years ago there was an incident at the factory where one of the employees went on a killing spree. So no guess where this film is going as once the rave kicks in, a stash of the energy drink is found (which was contaminated) and is passed out to the ravers.

But the drink doesn’t give the ravers energy (there are all drugged up anyway), it turns them into flesh-eating killing zombies. So Becky and her friends who didn’t drink the substance are all trapped inside the factory (someone has blocked the only entrance) and there is no way out. As the music goes on (the D.J. is killed but one of the zombies – a wannabe DJ – takes over the turntables and pumps it up), the real people must run around the factory trying to save their lives while also trying to think of a way to quiet the zombies. Becky, meanwhile, tries to rescue her love interest Hannah (Manpreet Bambra) from zombiedom. Will they get out? Are they able to get the zombies to turn into normal loud obnoxious millennials again?

However, attend at your own risk – and make sure there are no energy drinks or millennials around!