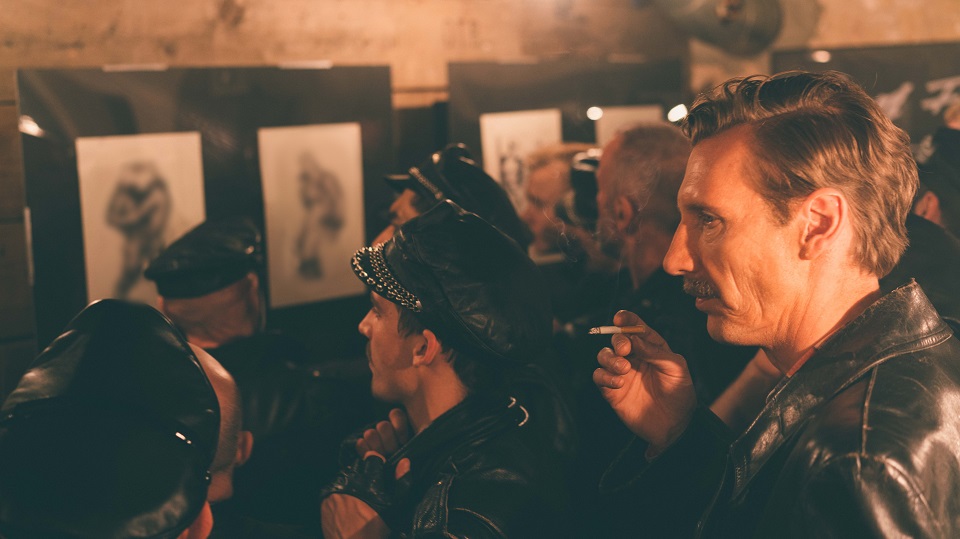 We all know who Tom of Finland was, but not many people know the real life story of the man behind the sexy images – Touko Laaksonen. The new movie ‘Tom of Finland,’ tells us about his fascinating, and interesting life.

But it’s a bit of a shame because the film is not very exciting. It should have been given that this man is most famous for his drawings of muscular and very well-endowed men in various incriminating sexual positions, but this aspect of the film takes a bit of a backseat to the more biographical nature of his life. Laaksonen, (ably played by Finish actor Pekka Strang), was a decorated officer in WWII and fought in battles against the Nazis where he was face to face with the enemy, and which makes an indelible impression on him for life. After the war, he returns home to live with his homophobic sister Kaijia (Jessica Grabowsky) and leads a very unexciting life working at an advertising agency. It’s only when he starts drawing men is when he starts feeling alive, more so because he starts to explore his sexuality in a place where it was illegal. Laaksonen then falls in love with the young lodger Veli (Lauri Tilkanen) he and his sister take in. This relationship instils confidence in Laaksonen and this is when his artistic talent starts to blossom.

Instead of getting sexier and more erotic, Tom of Finland the film maintains its understated and muted tone. As Laaksonen’s work (who by now goes by the name Tom of Finland given to him by his publisher) becomes more well known around the world, he goes to Berlin and then is whisked away to Los Angeles at the behest of a rich gay patron (played by Seumas Sargent) where we get glances of men frolicking in a swimming pool but it’s not enough to warrant any sort of excitement in a film that should be releasing hormones right and left. Some of the supporting characters start getting sick but there’s no real mention of the words HIV or AIDS in the film and it’s this disease that hits his community hard, at a time when no one really knew how the virus was contracted. And with no timeline mentioned in the film, it’s a bit difficult to know when these events took place to put the story into some sort of context.

Directed by Finnish Director Dome Karukoski and written by Aleksi Bardy, Tom of Finland has, of course, a very Finnish feel to it (definitely foreign and a bit dull and grey), which may or may not have impacted the film’s lack of excitement and dramatic possibilities. But the cast are all very believable and Strang does a very good job of playing Laaksonen’s life over a span of 50 years (!!). But Laaksonen deserves a more fitting tribute. He was a seminal figure in gay culture, one of the most influential and celebrated figures of twentieth-century gay culture, and ‘Tom of Finland’ the movie is not quite what I’d hoped it would be.

If you want real excitement, there is the Tom of Finland Organic Vodka to try – launched in the UK last month. Made in Finland from a blend of the finest organic wheat and rye with no added sugar, the vodka pays tribute to Tom of Finland through its smooth, spicy taste and flavour and it’s sexy packaging. The vodka was launched to coincide with the release of Tom of Finland.

The vodka is available now from select retailers including Gerry’s Wines and Spirits in Soho, London for an RRP of £32.50/50cl. I’ve tried it and it is superb.