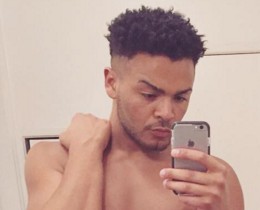 Leaving almost nothing to the imagination, Newcastle lad, Nathan Henry, 24, who came out as gay in 2015, has paid tribute to Kim Kardashian’s now infamous naked selfie, by stripping off and showing his Instagram fans a little more than his bedroom wallpaper.

However this isn’t the first time Nathan has taken on a naked shot. He also did a cheeky remake of Rihanna’s naked GQ cover, wearing nothing but a leather jacket and super imposing a moustache tattoo on his chest.

That time me and @badgalriri did the naked GQ cover ?? #nakeynath

In his sexy remake, Nathan Henry gets naked with nothing but a small black bar blocking his manhood and in homage to Kim’s photo – his nipples. He then posted his picture and Kim’s side by side.

Nathan came out as gay in December after previously identifying his sexuality as bisexual.

He was Geordie Shore‘s first bisexual cast member and now is the show’s only gay cast member.