ISIS Throw “Gay” Man To His Death To “Cleanse His Sins” 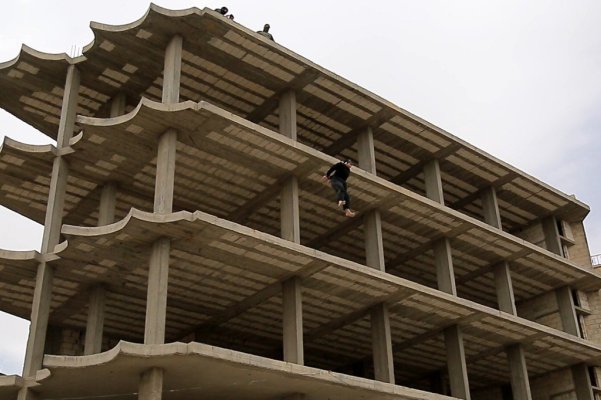 A man who it is claimed had gay sex has been thrown to his death from a building near Aleppo.

Islamic State fighters in Syria have claimed the life of yet another man accused of being gay by throwing him off a building in the northern Syrian city of Manbij near Aleppo.

A crowd of men and children watched the sickening moments as the young man was pushed from unfinished building structure in Manbij City.

According to sources ISIS called on the residents to watch as charges of sodomy against the man were read out by the ISIS Sharia Court.

“Throwing gays this way will cleanse their sins”

The barefooted young man, who was wearing all black and who was blindfolded, was then stoned by members of the gathered crowd after failing to die from the impact of his fall.

#SYRIA#IslamicState Throw Man Off A Tall Building & Stone Him To Death In #Aleppo For 'Being Gay'. #TerrorMonitor pic.twitter.com/ztpiZG9h38

A crowd of around 100 people, with some children with them are seen in the pictures published by the Terror Monitor group. After the man landed at the foot of the building some of the on-lookers, took up rocks to stone the defenceless man to death.