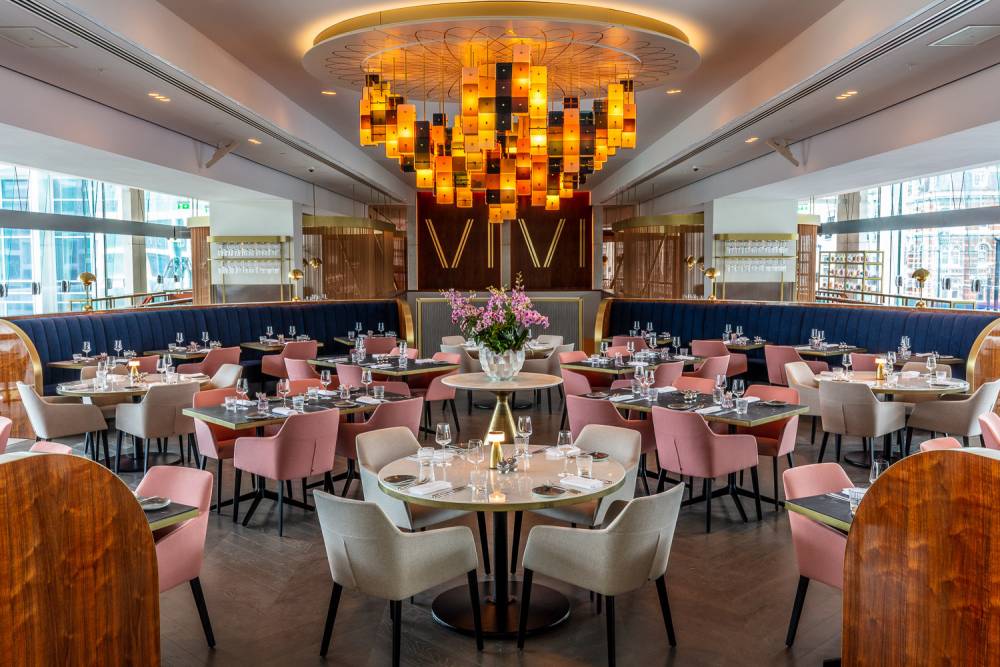 For those who remember Centrepoint 101 – the bar and restaurant on top of Centrepoint – 33 stories above ground – you’ll remember how great it was, more so the views and the cocktails and less so the food. Well, that space is now someone’s flat (boo hoo), so now we have the new Vivi.

Vivi, located in the wing that connects the original Centre Point building to Centrepoint House – the 1970’s tenement building – is a throwback to the 1960s when the Centre Point building went up – presenting food that is both traditional, safe but not very sexy. The venue itself is sexy, one flight up, overlooking New Oxford Street and the new piazza next to the now fully residential Centre Point.

It has a streamlined look with beautiful floor to ceiling windows that are used to great effect to maximize the space. There are gorgeous tables smack dab in the middle of the room as well as along the sides of the restaurant. It’s such a beautiful space, with an art deco chandelier that holds centre attention, it’s just absolute perfection architecturally.

So how’s the food you might ask? As mentioned before, it’s safe and traditional but you will struggle to find anything on the menu that is different. I’ve been twice now (the first time was during its soft opening – on its first night) and I have to say the food on my second visit was much much better. On their All Day Dining menu, the starter choices are fine but nothing really sticks out. They were out of the Quiche Lorraine on that Tuesday night of my second visit, so I settled for Grilled Leeks – four leeks served with a dollop of egg mayonnaise with mimosa dressing. It was good, as was the Waldorf Salad that I had on my first visit (both priced at £8.50). My dining companion on my second visit had the Prawn Cocktail – it was a massive glass stuffed with prawns with thousand island dressing over a bed of lettuce. For £12.50 – it was more than worth the price, and he said it was ‘great!’ But you might struggle to find anything better (Steak Tartare, Coarse Farmhouse Pate, and Cornish Crab, among others, add nothing unique to the menu).

It’s a bit of the same with the Signatures and Mains. Sure there is the standard steak dish – Rib Eye Steak (£34), but Rataouille (£14.50), Truffled Mushroom (£19.50), and Madras Monkfish (£24.50) are not dishes that particularly stand out. These are among the better choices (Beef Burger or Roasted Guinea Fowl Breast might good second choices). Chicken Kiev, one of their Signature dishes I had on my first visit, was just ok. Served with mash – it really wasn’t worth its £17.50 price tag. However, I had the Berkshire Pork Chop on my second visit – and it was superb! A large pork chop, perfectly cooked – nice and brown and meaty – served over a bed of hispi cabbage, with prunes and a prune sauce that was just superb and tasty. A surprise dollop of mash was also on the dish, though this is not mentioned on the menu – I had ordered a side of mash – which I am glad I did because both mashes were perfectly whipped – the way mash really should be!  (The pork chop was worth every cent of its £20.50 price). My dining companion ordered the Salmon Hollandaise, and he said it was moist and very good. Served with spinach, it was a nice size portion (at £22.50), and the potatoes on the dish were just about perfect, very buttery with a nice sprinkle of dill – melt in your mouth tasty!

And the best was yet to come – the Sweets. On my first visit, I had the Apple & Rhubarb Crumble – it was a very large portion (almost like a mini pie!), but it was served cold. This time I had the Rum Baba – and it was unique and superb! Sponge cake soaked in rum with chantilly cream and caramelised orange sprinkled on top, with vanilla ice cream which was literally the icing on the cake. Absolutely delicious! And my dining companion loved his Millionaire’s Chocolate Bar – pure Cocao chocolate ice cream, chocolate bar and a chocolate crisp too boot! Just yummy!

Vivi has a few other menus on offer. Their Breakfast menu looks very good, and reasonably priced, and includes Waffles or Pancakes (£8.50), Full English (£15.00 – very full!), and Eggs Benedict, Royale and Florentine (£10.50 – £12.50), among other excellent choices. The Brunch Menu is a mix of the Breakfast and Main menu, while the Lunch Set and Theatre (5-7pm and 10-11pm) is great value – two courses £21.50 and three courses £24.50, and includes a complimentary glass of prosecco. Traditional Afternoon Tea is proving quite popular – Classic at £29.50 and Champagne at £39.

Of course, Vivi has a full-on bar, wine and beer menu. There are Back to Classics Cocktails – including the Pink Floyd Rhubarb, which was sweet and punchy with the rhubarb giving it a nice flavour. There are also non-alcoholic cocktails – I had the Refresh Your Berries shake that was berrylicious! Gins, rums, vodkas, tequila, cognacs and brandy are also on the list – pretty much anything you fancy Vivi has it!

Vivi is not just a name but it’s also an identity.

As roman numerals, Vivi gives a nod to 1966, the year Centre Point was born. And while most of us were not around at this time, we can still celebrate the old Centre Point by visiting Vivi. I just wish there were sexier choices on the menu, but everything else is flawless, from the service to the decor, to the ambience, and to the location – right next to Tottenham Court Road – you can’t get more central than that. Vivi has retro food in a very stylish setting – which alone makes it unique and stands out. Long live Vivi!