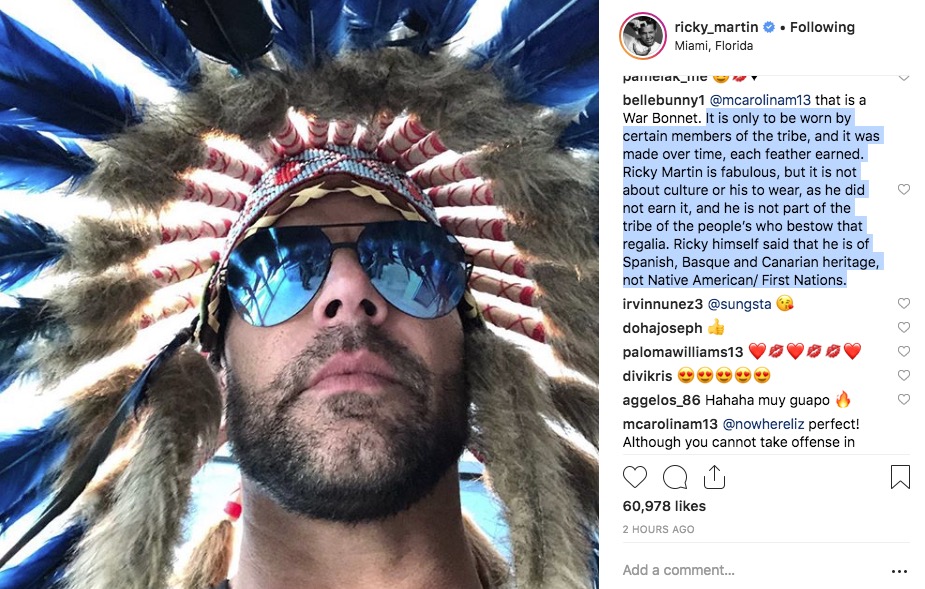 Ricky Martin has been accused of cultural appropriation after wearing a traditional Native American headdress.

Ricky Martin has been accused of cultural appropriation after wearing a traditional Native American headdress.

International pop star Ricky Martin has been accused of causing offence to Native people and cultures after posing for a picture in which he is wearing a traditional Native American headdress.

One user on Instagram wrote, “Are you Native? If not, take that headdress off!” While another wrote, “There’s information all over the internet explaining why this is upsetting/offensive to Native people/cultures”

“Not a costume to wear at a club”

When a fan tried to suggest that the headdress was a Taino headdress, a user, BellieBunny1 corrected the assumption by saying, “Ricky Martin was raised in Puerto Rico he is not Puerto Rican. He is Spanish Basque and Canarian, and that is not a Taino headdress.

“Like I said, that is a War Bonnet only to be worn by certain members of the tribe, it is sacred, not a costume to wear at a club or because it’s a carnival. It is earned one feather at a time, so unless Mr. Martin suddenly turned into an important member of one of our Tribes, and earned each one of those feathers on the regalia, he hasn’t the right to wear it as he has not earned it and he is not a part of my culture or heritage.

“The fact is he is NOT Native American, he is of Spanish, Basque and Canarian heritage and not entitled to wear this War Bonnet, and I AM the daughter of a card carrying Native American / First Nations Elder.

BellieBunny1 continue to educate on the matter by saying that each feather in the headdress is actually earned.

“It is only to be worn by certain members of the tribe, and it was made over time, each feather earned. Ricky Martin is fabulous, but it is not about culture or his to wear, as he did not earn it, and he is not part of the tribe of the people’s who bestow that regalia. Ricky himself said that he is of Spanish, Basque and Canarian heritage, not Native American/ First Nations”

What happens in Miami…… ends up on IG. . #miami #studiotime

Another user hit back saying, “I am Puerto Rican myself. We are from Taíno (indigenous), African, and Spanish descent. Native Americans are NOT the only ones with these headdresses. This is normal from our Taínos, and like I said, in the Caribbean, we dress up to pay homage”.

In recent years the wearing of headdresses for festivals and in particular Halloween has been heavily criticised for cultural appropriation. The wearing of sacred clothing for fun or for show can be seen as deeply offensive to some from the culture from which the costume or clothing comes from.