Six things we loved about Oranges and Elephants, Hoxton Hall 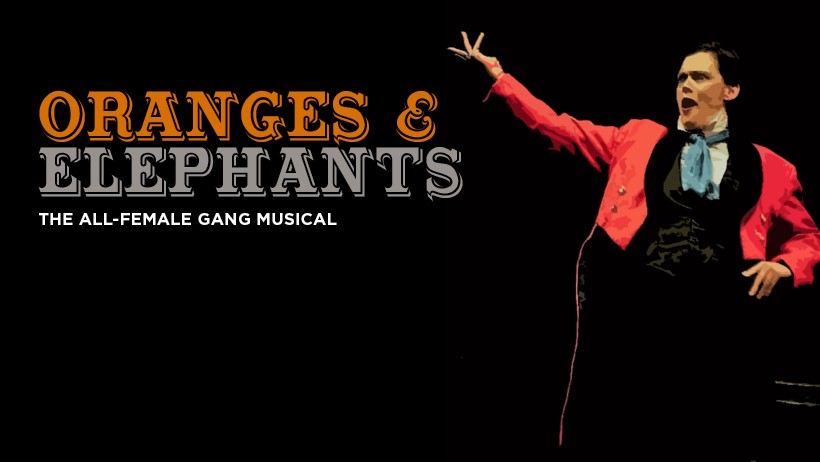 An all-female musical has opened in London, Oranges and Elephants

1) The story. Set in Victorian London and there’s a turf war between two all-female rival groups, the Oranges and the Elephants, led by two fierce women and their battle to reign supreme. Plot: Get two sparring gangs, in a Victorian setting, throw in a newbie (a brilliant Sinead Long (Mary)) to the city, a quick lesbian romp, dressed it all up in drag king goodness conclude with an ending even Shakespeare would be proud of and you’re close to why Orange And Elephants is the most exciting musical to open in London in an age.

2) The lack of men.  This show simply doesn’t need us menfolk. We’re not missed. At all.  So yeah, f*ck the patriarchy. The cast’s observation of masculinity and, well, frail masculinity at that, is superb. A special mention to Rebecca Bainbridge, whose gangster, Ada (Oranges), is frankly beyond scary and you won’t find a more vicious matriarch than Liz Kitchen’s Annie, leader of the Elephants.

3) A new musical… At last a new musical that isn’t a jukebox musical. All new music and perfectly suited to the piece. It is ballad heavy but there are a few rousing gems from Jo Collins’ score. The entire cast gets involved with playing the instruments and acting without it feeling forced, and there’s also audience participation, expertly carried through by our narrator. Oh, and BTW, it’s funny. Very funny.

4) Costumes. Some of the best costumery (Sara Perks) we’ve seen in a long time and while we’re at it, a special mention to the set design. Simple but incredibly effective. You won’t look at an A to Z in the same way again… (for those who just asked, what’s an A to Z, think Google Maps but on paper).

5) Hoxton Hall. This is a double edge sword for us. On one hand, the music-hall design of the rather stunning venue helps transport you back to the Victorian era – but it has, without a doubt the most uncomfortable seating, so bring a cushion.

6) A nod to the queer community – as there’s even a little bit of lesbian twist, which sticks two fingers up at the traditional boy meets girls blah blah blah. Bravo!

A little rough around the edges, but a ruby in the Victorian dust.

Oranges and Elephants runs at Hoxton Hall until 10 February.