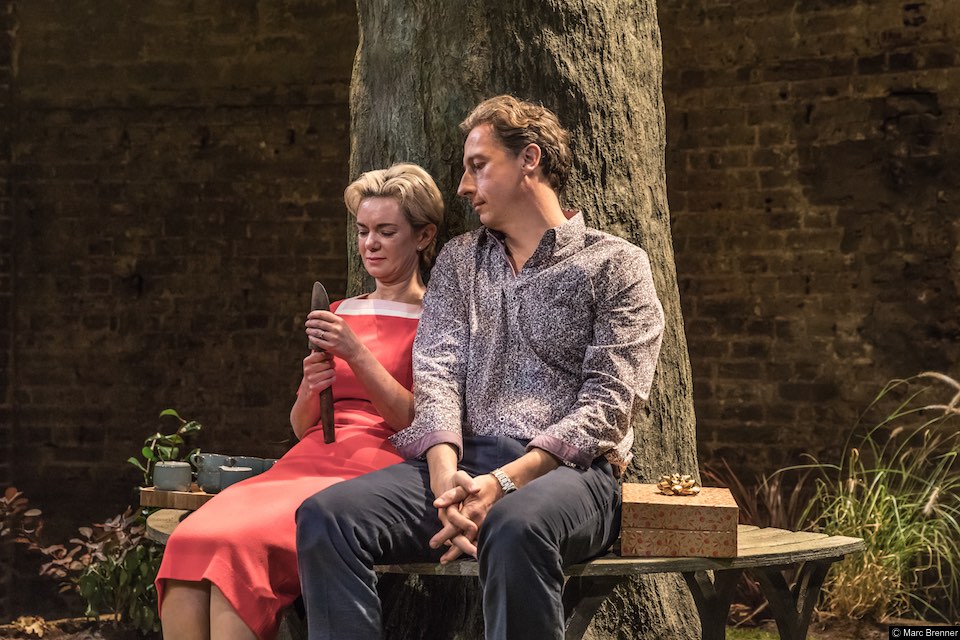 Mike Bartlett is riding on a high at the moment after the success of the second season of woman-scorned drama ‘Dr Foster’. As well as the much acclaimed TV drama he’s also a versatile and witty playwright with a string of theatre hits including the stellar “King Charles II” (what Prince Charlie did next), “Game” (the privileged classes shoot chavs for fun) and the epic “Earthquakes in London” (I think you can work that one out for yourself).

His new play Albion is a sprawling three-hour epic concerning a successful businesswoman who uproots and plonks herself and her family down in a rural idyll with a dream of restoring an historic garden. Audrey is a bit of an uber bitch on one level. Suffering from profound grief following the death of her son in armed combat, she’s prickly and caustic, riding roughshod over her wet second husband and her disaffected daughter. Not to mention her guilt ridden middle class angst about the help, her strained relationship with her lesbian novelist best friend as well as her less than sympathetic views towards the local villagers who soon come to despise her. She’s also a strangely sympathetic character and is painfully real. It’s a tight script with echoes of Chekov (think disaffected people knowingly lurching towards disaster). Watching this feels a bit like settling down with a long but enthralling novel. It’s more than just a story. There’s a heavy layer of allegory and Bartlett turns his razor sharp gaze on to the people of England and their conflicted feelings towards their country.

It’s a cracking play with multiple layers and is both thought provoking and emotionally involving without being preachy or patronising. The cast are universally strong, none more so than the fantastic Victoria Hamilton who plays Audrey. She’s been all over the TV of late as the put upon neighbour in Doctor Foster, The Queen Mum in Netfilx’s The Crown and the double crossing spy in the BBC2’s The Game. She’s magnetic and more than strong enough to carry this strong central role of a difficult but ultimately likeable woman.

The stage set is absorbing and convincing. A huge tree dominates a long garden which the audience sit around in a horseshoe shape and it’s hard not to be taken in and feel like you’re out in an English country garden watching the human wild life fight it out.

This is a rare treat. Go and see it while you can.

Albion plays at the Almeida Theatre  24th of November 2017