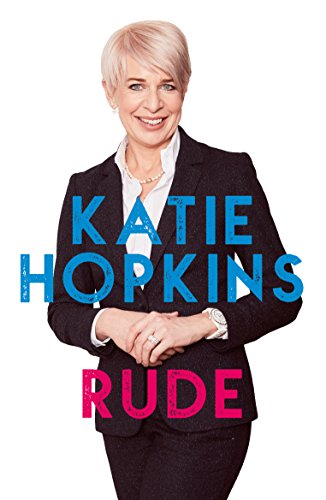 Katie Hopkins’ book, Rude has had its publishing date pushed back…

Is Rude in Rude health? Katie’s publisher pushes back the drop date for former Celebrity Big Brother and Apprentice star Katie Hopkins’ book. When we first wrote about the book in June the book was placed at number 31,776  in the Amazon Best seller’s list – from pre-orders alone and had a publish date of 5th October 2017. Publishers, Biteback have now advised that the publish date is now 7th November.

The book now sits at number #22,535 in Amazon’s best sellers’ list. Hopkins has now embarked on a speaking tour,

Katie Hopkins, who has in the past said that it was her mission in life to become a “gay icon” has had a number of setbacks this year, including her legal battle with Jack Monroe and her departure from the LBC radio station. She does however still have her column with the MailOnline.

THEGAYUK.com reached out to Katie’s Publisher for comment who said,

“On 7th November Biteback will publish Rude a memoir by Katie Hopkins.

Love her or hate her, Katie Hopkins is impossible to ignore, and this hilarious and revealing new book – part memoir, part handbook for the modern woman – is the same.

Laughing through the chapters of her life, she shares her disasters, her biggest disappointments and the time she had to ring her super sensible boss to say she was on the front pages of the tabloids having sex in a field.

From being kicked out of the army for being epileptic, to firing little Lord Sugar; from her first husband leaving her in the maternity ward for the big-boobed secretary, to the reality behind Celebrity Big Brother, she has plenty of surprises to share and lessons she thinks we should learn.

Readers be warned, however. Katie doesn’t sugar-coat anything, and neither does she hold back, making her as honest in her book as she is in life.

But this book is an introduction to a quieter Katie too, one people seldom see. She takes us beyond her front door and into the privacy of her home, writing as a mum of three, sharing things even she feels awkward saying.