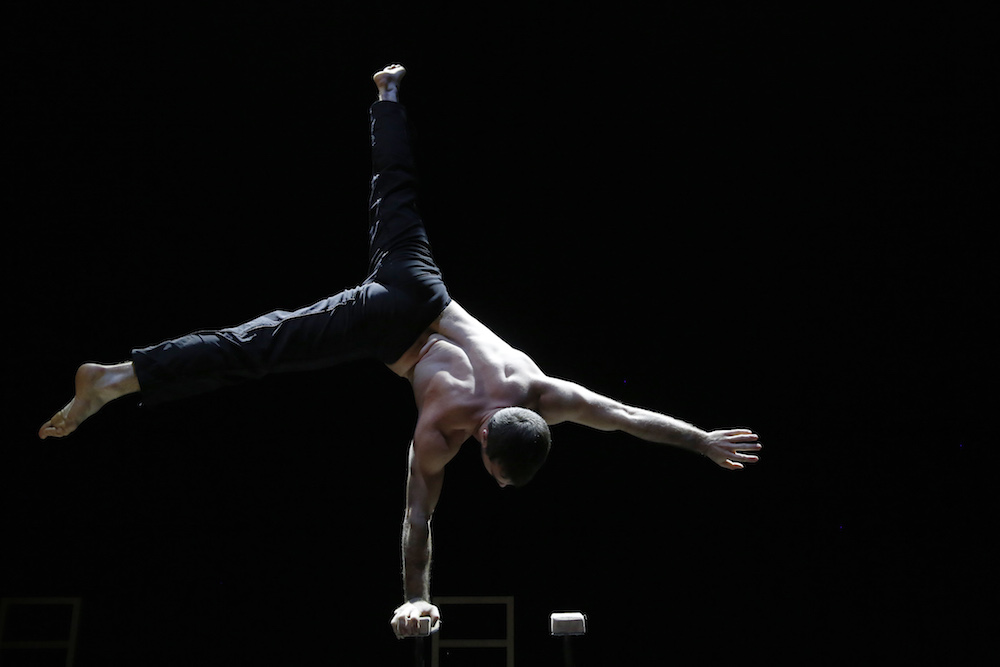 ★★★★ | Closer by Circa, Udderbelly London

Circa is a troupe of award winning acrobatic performers. They’re renowned for their stripped back style of circus performance with no added glitter, spectacle and pizzazz. There’s not a spangly leotard, ring of fire or dancing dog in sight. It’s all about the actions, bodies and skills and being, well, closer to the action (hence the name of the show). You can see every ripple of muscle, facial expression and tensing of fibres and it’s very impressive indeed.

Five performers take to a bare stage with a minimum of props and work through a variety of routines. It’s not long before the audience are holding their breath and pulses are racing. The troupe works through a variety of styles and routines. They form shapes reminiscent of human mobiles, transform into human towers and meld into poignant huddles. There’s something moving about the emotional connection of the performers as they interact with each other. Part athletics, part circus, part mime (but not the naff kind) and part ballet; it’s a varied and clever show. There are a few moments in the 70-minute show that fall slightly flat but otherwise it’s a pacey rollercoaster of a performance.

The soundtrack is a mix of old and new with songs varying from Nouvelle Vague covering Echo and the Bunnymen through to Sinatra crooning Sondheim. Naturally, the bodies and plain gorgeousness of the acrobats is a talking point too. They’re breathtakingly beautiful and manage to combine wholesome good health along with an underlying sense of raunchiness. It’s hard not to fall a little bit in love with them.

Go and see this show. Even if you’re feeling jaded by too many circus/acrobatic displays then this one will show you that there’s plenty of fresh mileage still in the art form.

Until 12th June, at  The Southbank Centre, Udderbelly