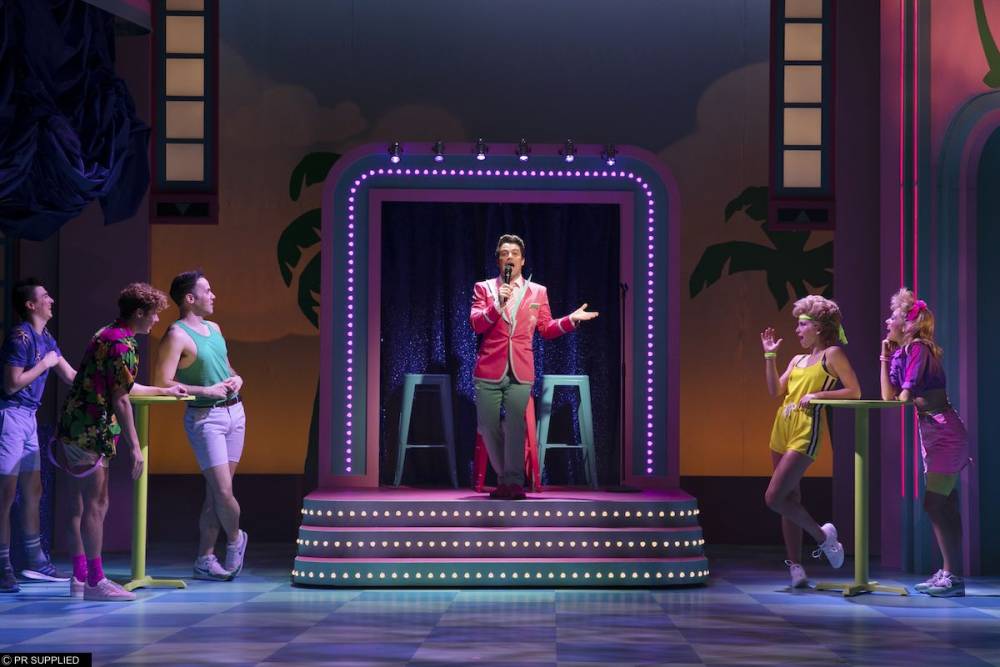 After being jilted at the altar, lovelorn Ollie embarks on the planned honeymoon with his friends, arriving at Hotel Club Tropicana. However, unbeknown to him, his bride-to-be also had the same idea and arrives with her bridal party.  Meanwhile, overly camp entertainments manager, Gary, (X-Factor’s Joe McElderry) and hotel managers Robert and Serena have entered the hotel into a competition, and are in the midst of trying to butter up the hotel inspector, Christine, by any means necessary.

Like many jukebox musicals, the wafer-thin story is used solely to wrap around the string of the Eighties hits, which are perhaps the show’s strengths, comprising primarily of upbeat classic pop which you can’t help but clap along to; whilst a bit of forced audience participation and a manic energy throughout the show resonated with the audience and created a party atmosphere in the theatre.

The show sits somewhere between dated sit-com and pantomime, but with an added abundance of crass innuendo, stereotyped characters which belong firmly in the Eighties and plenty of jokes about bodily functions. Written with every cliché in the book, from the characters to the story and from the jokes to the borderline offensive stereotypes, there is nothing here by way of originality.

But the show is silly enough to just about get away with it, and there are a handful of genuinely funny moments and some decent one-liners. Kate Robbins steals the laughs as Spanish maid, Consuela (yes, it really is that clichéd), McElderry camps it up whilst the ensemble cast dance their neon Day-Glo socks off. With plenty of nods to the decade that fashion forgot, and songs which you know all the words to, Club Tropicana is crowd-pleasing nonsense, provided you take it on face value and enjoy it for what it is.

Club Tropicana is at Sheffield Theatres until 9th March 2019 before continuing its national tour.