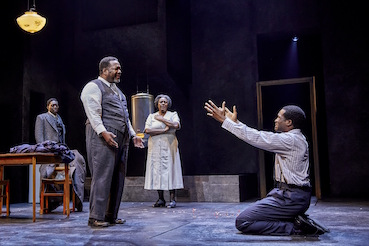 Wendell Pierce and Sharon D. Clarke are amazing in the new production of Death of a Salesman.

Though it’s Pierce who shines a bit more. The show belongs to him in which he plays the character made famous by playwright Arthur Miller – Willie Loman. Transferring from the Young Vic where it played to packed houses, the show has not lost its impact, and in its new home – the Piccadilly Theatre – more people will now be able to see these actors at the top of their game.

Olivier-nominated Pierce is so so so good – it’s an amazing performance where he plays a man who is unravelling – he’s no longer relevant at work, he has a bad relationship with his two sons (Sope Dirisu and Natey Jones – both very good), and to top it off he has suicidal tendencies. About the only thing that keeps him grounded is the love he has for his wife (Clarke), and the love she has for him. But with two jobless adult sons who have not amounted to much, and a job where his young boss (who is the son of the boss that originally hired him), who doesn’t recognise the years and years Willie has dedicated to the job, and practically shuns and doesn’t honour his request to work closer to home  (don’t pick up a dropped pencil is the message here), Loman is close to his wits end.

Death of a Salesman is a long show (3 hours and 10 minutes including interval). But it’s riveting. As we watch scenes with Pierce and his sons, and the disappointment he sorely does not want to admit to – Pierce just owns it. And his scenes with Clarke are so tender and vivid it almost feels very realistic. Directors Marianne Elliott and Miranda Cromwell, along with set designer Anna Fleischle, have very successfully re-jigged this show with a black cast to make it seem relevant and real more than 70 years after it was originally written.