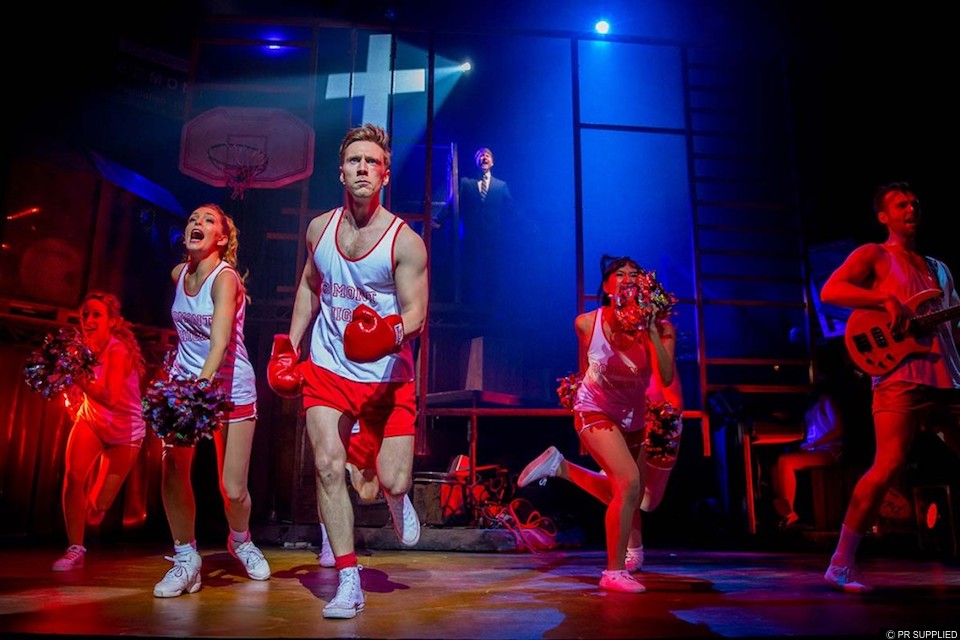 Kevin Bacon became a worldwide star in the 1984 hit film. And while there have been lots of stage versions produced after this, “Footloose,” no matter how many times you’ve seen it or have hummed the title song, will always bring a smile to your face.

Another revival, now at the Peacock Theatre near Aldwych, and arriving into London right after a UK tour, keeps the toe-tapping alive with the show about a small town that has banned dancing, and the young out-of-towner who plans to shake things up.

Rem McCormack (Joshua Dowen) and his mom Ethel (Lindsay Goodhand) move from their hometown of Chicago to the very small town of Bomont after Rem’s father left the family home to go ‘find himself.’ Rem integrates into his new school, filled with all sorts of people (though none of them, curiously, are black). His fellow students include Willard (Gareth Gates, who gets star billing) and the minister’s daughter Ariel (Hannah Price). It comes to light that the powerful minister, the Reverend Shaw (Reuven Gershon), has banned dancing in town because five years ago his young son and three others were killed in a car crash, no doubt, according to the minister, caused by the kid’s night out of having too much fun and possibly drinking.

But Rem wants to have fun, but at the same time can’t seem to hold down a job due to his motto of trying to do the right thing, and he’s gotten off on the wrong foot with Ariel’s boyfriend Chuck (Connor Going – who strangely disappears during the middle of the show but returns for the finale). The other kids end up getting Rem to speak up for them at the city council meeting to denounce the dancing ban while it’s no surprise that Rem and Ariel have the hots for each other. It’s lots of loose feet, catchy tunes, a hot and sexy cast and way too many crotch jokes that make this version of Footloose a slight winner.

The music and the talented cast make the show very entertaining, but the show as a whole could be better. While all the film’s hits are included (“Footloose” of course, “Let’s Hear it for the Boy,” as well as “Holding Out for a Hero”), with some of the arrangements of these songs a bit different than what we’re used to, some of the other songs make a very big thud, including the dismal “Heaven Help Me” sung by Gershon. However, “Somebody’s Eyes” is beautifully sung by most of the cast in a very memorable scene. So while there are more ups than downs, the cast at the end of show work very very hard to get their standing ovation, practically repeating, in very shortened versions, almost every catchy and lively song from the show. And even though Gates gets top billing (and he even takes his top off to reveal an absolutely stunning body), both Dowen and Price are the true stars of the show. Their chemistry on stage is very real – both very good looking with all-American looks. Director Racky Plews and Choreographer Matthew Cole have, almost, done Kevin Bacon proud.