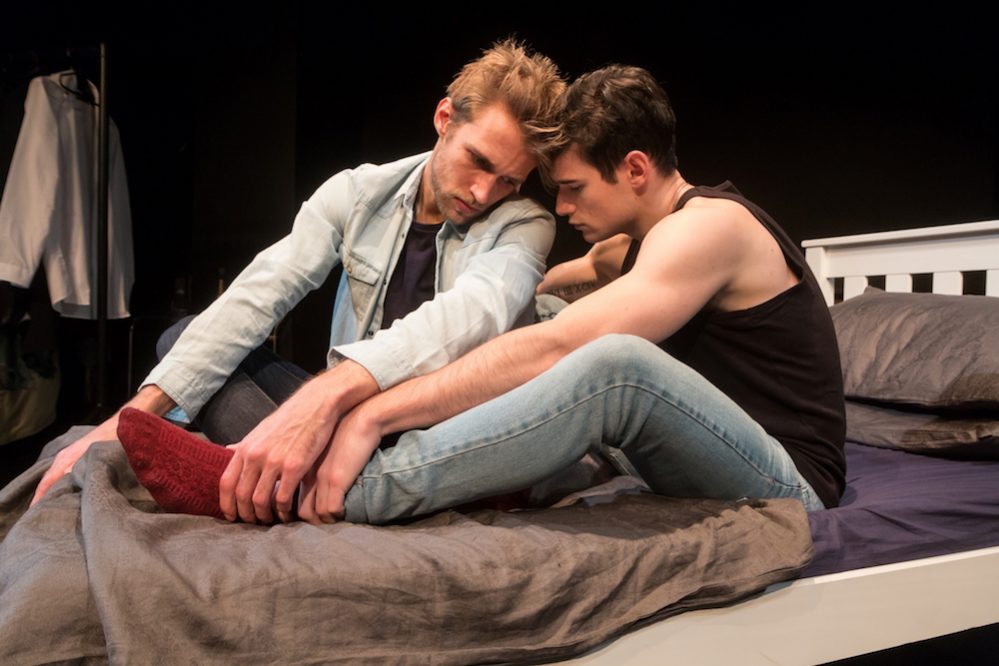 Holding the Man is a play by Tommy Murphy (Strangers in Between) that was also made into a film in 2015.

It’s based on Timothy Conigrave’s 1995 memoir, an elegy to his late partner, John Caleo. The pair met as teenagers in 1970s Australia and fell in love, facing parental disapproval, trying to find where they fitted into society and experimenting with their sexuality. Sadly, Conigrave died aged 34 from an AIDS related illness shortly after completing the book. This is more than just a play about the AIDS crisis, though. It’s a tender love story and a reflection on the problems faced by young gay people, which is still pertinent today.

Director Sebastian Polka has taken a clever starting point to staging this play. The play is wide in its scope, covering Tim’s Catholic school upbringing through to his death, looking at his first experiences of the gay scene and gay activism, his career as an actor and the highs and lows of his relationship with John. Polka takes Tim’s acting career as a point from which to present the characters with the stage being a dressing room where Tim conjures up scenes from his life. Tim is played with skill and sensitivity by lean and angular Christopher Hunter along with astonishingly good muscle hunk Paul-Emile Forman as John. The astonishing thing is that this is Forman’s professional debut and he gives an incredibly subtle and nuanced performance. The rest of the characters from Tim’s life are played by four actors who constantly change clothes and accents along with their roles.
It’s an interesting play that is well staged but ultimately the problem lies in the play itself. It’s a major task to try to present twenty-five years of a man’s life in such detail in one play.

The focus on so many events ends up detracting somewhat from the whole effect and leaves it feeling oddly bloodless. The actors barely have space within the dialogue to convey much and the piece occasionally feels superficial and has less emotional depth than it could have.