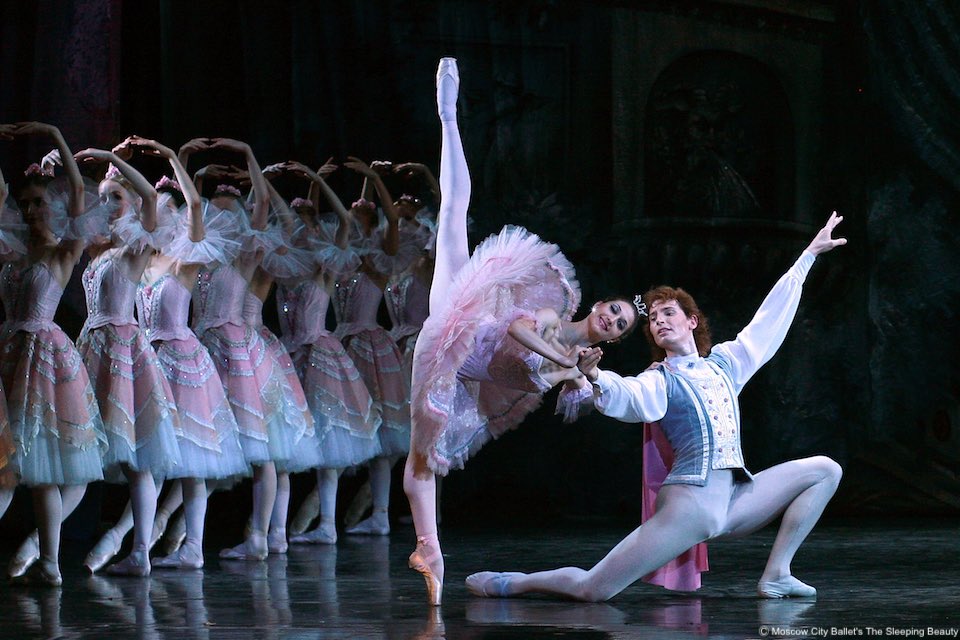 If you are looking for an accessible, straight forward evening of ballet which showcases the skill and suppleness of these talented individuals, then this may well be the production for you.

Set to the music of Tchaikovsky, and recounting the fairy tale of The Sleeping Beauty; Moscow City Ballet return with one of their better presented, yet staunchly traditional ballets; as Princess Aurora is cursed by the evil fairy, Carabosse, and sleeps for 100 years until she is awoken by the kiss of a prince.

Of the various ballets in Moscow City Ballet’s repertoire, this is perhaps one of the better presented pieces. With its feet planted very much in the traditional tights and tutu’s style ballet, this production lacks the dramatic flair of Matthew Bourne’s New Adventures; and doesn’t have the detailed narrative of Northern Ballet; but does offer a timeless take on a classic ballet which is used to showcase the dancer’s skills and talents, rather than deliver an exhilarating narrative or flashy visuals.

With some impressive costumes and utilising a static set of backdrops to create a workable dance space, there were times when the ballet sparkled and really came alive, especially during the ensemble pieces and, in particular, in the opening scenes of Act 2, which were quite charming. But despite the technical ability of the dancers, the choreography felt rather lacklustre at times, especially towards the end of the third act where it all became rather repetitive. Compounding that, there appeared to be little connection between the characters on stage, with the dancers performing with fixed grins whilst staring out into the middle distance, and not really looking as if they were enjoying themselves at all.

Sleeping Beauty is a mixed production. When it is at its height, it has genuine charm; but does have a few lulls in the pacing of the production, especially as it tails off towards its conclusion. But that said, it has some technically excellent performances from the company and is about as traditional as they come.

If you are looking for an accessible, straight forward evening of ballet which showcases the skill and suppleness of these talented individuals, then this may well be the production for you.

Moscow City Ballet are at Sheffield Theatres until 12th January 2019 before continuing on their national tour showcasing four ballets, Swan lake, The Nutcracker, The Sleeping Beauty and Romeo & Juliet. Details can be found on their website.