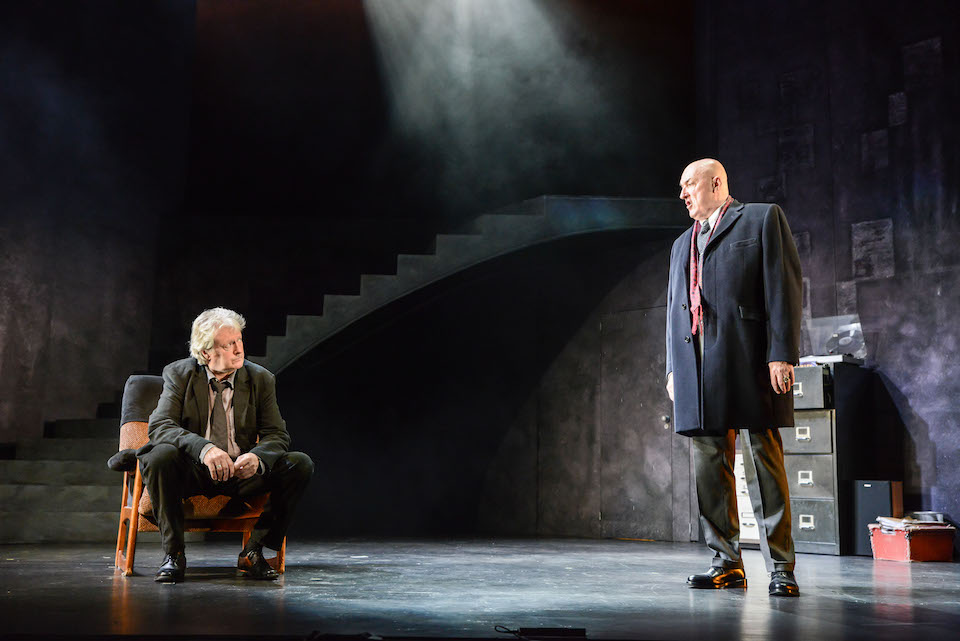 Ian Rankin’s novel series came alive on stage via the adaptation of Rona Munro. It was an atmospheric and sombre affair.

Rankin’s novels first featured the character of John Rebus in Knots & Crosses where he was merely 40 years old, and he grew older, bitter and more cynical as his life progressed in the subsequent novels, Black and Blue, Exit Music, In A House Of Lies, etc. Putting Rebus on stage was not Ian’s original conception but a fan of his books, producer Daniel Schumann’s. Ian chose Rona as he wanted her take on this robust and clout-packed character.

Not an adaptation of any of the 19 novels, Rebus – Long Shadows is a unique story bringing together the three protagonists of his series: Rebus (Charles Lawson), Clarke (Cathy Tyson) and Cafferty (John Stahl). The promise was to excite the book fans while giving the newbies a real taste of whodunnit. Centred around two murders that happened ten years apart, but a vivid haunt for Rebus, physical ghosts, and on the ground too, make for an unsettling mystery.

Charles Lawson, who most will know as Jim McDonald in Coronation Street (ITV) really embodied Rebus in a sombre, tired portrayal, but with spouts of energy in a man who had decades of unfinished business. I never read the books, but Charles portrayal is the image I would have had in my mind. His multi-faceted performance created powerful moments as the murder mystery unravelled. In some parts, Lawson was like Lear of the murder realm.

Cathy Tyson did a good job as Siobhan Clarke, but as a whole it was not a totally captivating performance. Her portrayal of Clarke was not a secure one, and I am not sure her decades’ bond with Rebus was consistently convincing. John Stahl was exactly what Cafferty was described as, and it was very enjoyable watching his dangerous and playfully performance.

Neil McKinven played everyone else, but most importantly, murderer Mordaunt, and Andy. It was a very energetic multi-role play, and Neil used comedy very well. However, sometimes it was hard to distinguish between characters, and I think it was due to costume changes that didn’t change much and how quick he was back on stage. The murdered ghosts of Angela and Maggie by Dani Heron and Eleanor House respectively was a well synchronised vocal and physical performance adding more mystery to the narrative.

The set was fairly simple. The furniture for Rebus’ home was always seen in other scenes which took away from the illusion. However, there was a really nice moment with purple lights shining against the wall of Cafferty’s home making his apartment look very ostentatious, very different from Rebus’.

Charles portrayal of Rebus is well worth the visit of die-hard fans, but perhaps you had to read the books to be fully immersed.

Rebus: Long Shadows is on at Birmingham Rep until the 6th October 2018