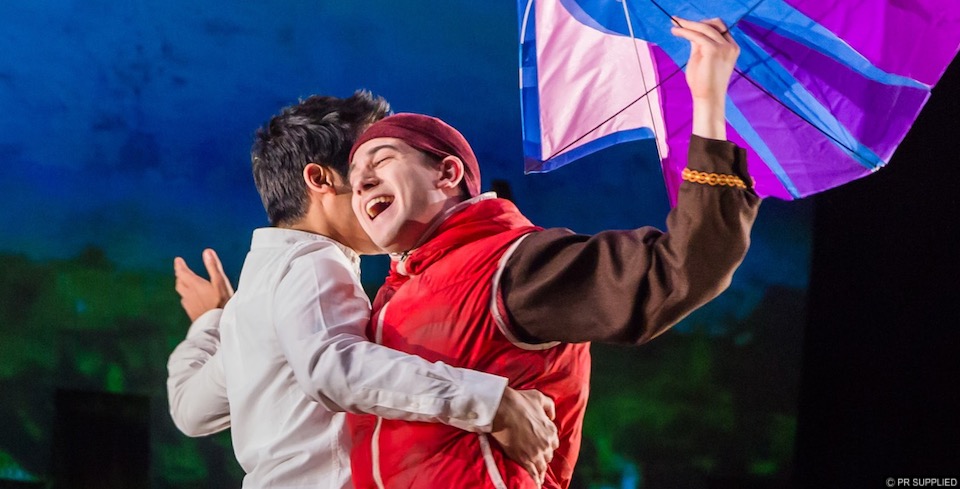 Gritty, raw and a history lesson like no other.

The Kite Runner, by Khaled Hosseini, is a sensational book and it made critical acclaim as a film too, so expectations were always going to be high. Adapted by Matthew Spangler, The Rep play version created a new window to look through the melodrama and tragedy surrounding the life of Amir.

The story centralises itself around Amir, a well-to-do Pashtun boy, and Hassan, a Hazara who is the son of Ali, Amir’s father’s servant. Hassan is the fastest kite runner the town has ever seen, and he teaches Amir the art, all so Amir can impress his stone-faced father.

This must have been a hard concept to attempt to translate from a novel page to a main house stage, but Barney George’s design painted a very raw picture. The set moulded itself to suit outside and indoors with little effort. Fluid scene changes via media projections, and a curtain in shape of a kite which was used to shield viewers from hard-to-watch moments. Live percussion, performed by Hanif Khan, brought a mystical layer to the melodrama. The sound effects were also harrowing in parts.

What made this production special was the cast of The Kite Runner. Raj Ghatak, as Amir, really helped us see the character come to life through language, enacting young and older Amir, as well as punchy speeches with sincere conviction. Jo Ben Ayed stole the show, with his portrayal of Hassan, formidable dexterity in playing a young boy while showing mature emotions. Jo’s characterisation contributed to the emotional experience felt in The Rep auditorium. The unrelenting loyalty to Amir was masterfully achieved by Jo. The boys’ fathers Baba and Ali played by Gary Pillai and Rez Kabir respectively, enhanced the sense of tradition and honour. Both actors shone, adding a darker tone to the narrative. Assef was a sickly and revolting character, played expertly by Soroosh Lavisini.

Soroosh’s movement and speech was skin-crawling and made it hard to watch, but this was a true depiction of the nasty and malevolent personality.

This production is close to three hours long, but through gripping action, efficient set, light, sound and everything else involved, The Kite Runner left us with the feeling we could have watched more.