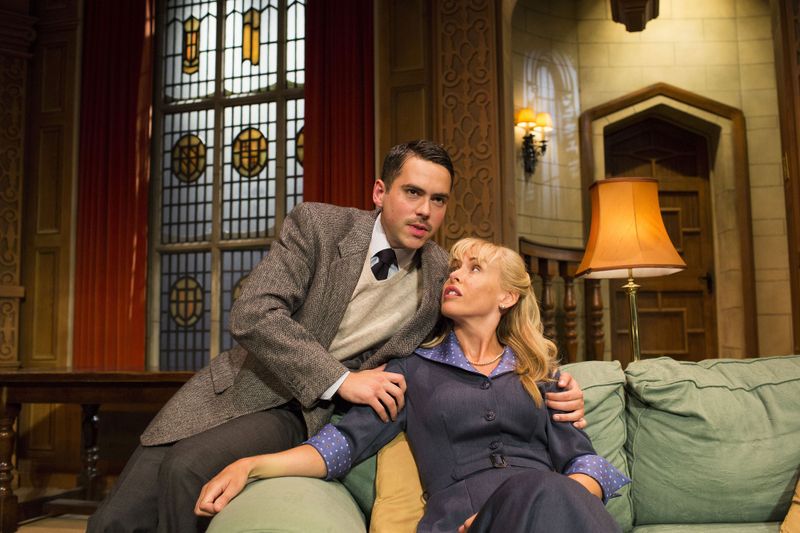 I have to confess something. I love a good Agatha Christie. There’s something about those comfortable characters, nostalgic settings and contorted plots which always thrills me. You can sink nostalgically into a Christie but never feel too complacent or safe as she’s apt to trick you into feeling you’ve got a grip on the plot then twisting your expectations with a clever twist as she displays her skills with a cunning murder or two.

Amazingly, her most famous play, ‘The Mousetrap’, has been running constantly since 1952 and to celebrate the Diamond Anniversary, the play has embarked on its first ever UK wide tour. Much beloved of middle aged ladies and foreign tourists, the play actually still has a lot to offer in terms of thrills and amusement which is maybe a key to its record breaking success.

Giles and Mollie Ralston have embarked on turning their spooky old manor house into a guesthouse and are about to accept their first paying guests. As they anxiously await their first houseful of guests a blizzard rages outside and the event turns into something far more sinister as they learn that there is a serial killer on the loose who is targeting someone in the house in an act of bitter revenge for past misdemeanours.

The play vexed my little grey cells as much as they would have Hercule Poirot’s and my knitting rested firmly in my lap. I’m sure even sweet Miss Marple would have dropped a stitch or two at times and looked over her glasses agog. There are elements of comedy and enough creepiness to have you reaching to check your blunderbuss was safely stowed by your side and your wasp poison locked away in a sturdy cupboard out of the reach of your vengeful maid. There’s a familiar faced celebrity cast too, including Bruno Langley (sweet little Todd Grimshaw from Coronation Street), if that’s your thing. There were some stirling performances all round.

I’d highly recommend this play for a night of escape from the modern world. I can also exclusively reveal that the murder is ….aaaaarrrghhhhh!

Check out this great play at a theatre near you as it tours till November 2013.