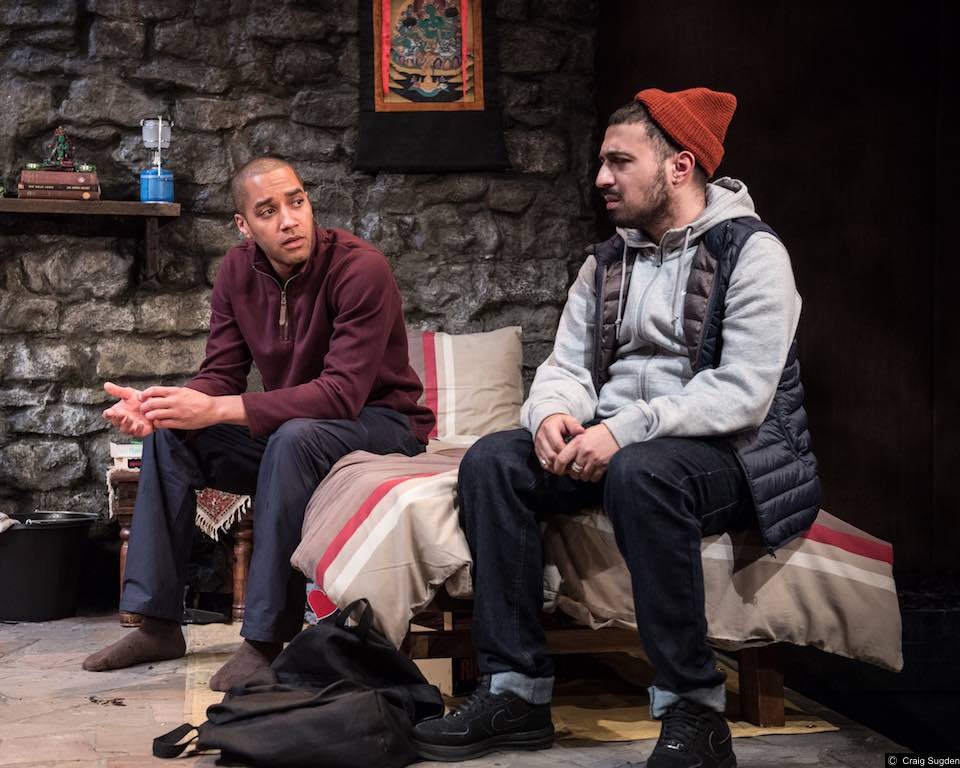 Luke (Samuel Anderson) is in a Buddhist retreat – his every day a blissful mix of meditation, mindfulness and isolation in the Scottish Highlands. That is until his brother Tony (Adam Deacon) arrives. With him come memories of a troubled childhood, and reminders for Luke of the life he left behind in London. Is Tony everything that was wrong with Luke’s life, or the only one that can see into his soul? And is Luke’s fellow Buddhist Tara (Yasmine Akram) – beautiful, spiritual Tara, only keen to help Luke achieve karma, or does she hold ulterior motives?

The Retreat is a play by Sam Bain – co-writer and co-creator of Peep Show, Fresh Meat and Four Lions. Bain spent an earlier period of his life living in a Buddhist retreat, and regularly practised meditation and mindfulness, so my initial fear was that this play could go one of two ways – either be packed full of pro-Buddhist PR, or full of jokes making fun of Buddhism and those who practice it. A misplaced fear, it turns out, as The Retreat treads a far more interesting path – exploring the collision between the Buddhist themes of calm, isolation and peace with the more western rush of drink, drugs, and money.

Characters Luke and Tony serve as cleverly portrayed devices through which Bain explores his themes, and it works very well indeed – the script raises interesting questions to the audience but never veers into preaching or sneering at any particular life choice. With Bain’s resumé you may assume that The Retreat is packed full of jokes, and you’d be correct – they come thick and fast throughout but are set up naturally by the cast – Adam Deacon’s Tony delivering the vast majority of the punchlines with effortless calm, and a real highlight being a monologue about meditation, Will Smith and Harry Hill that had me, and the audience, in absolute stitches.

My only real issue with the jokes is that the frequent nature of them meant a fair few were lost by the audience entirely – a shame, given just how high quality the calibre of comedic writing in the script is, and the switch between humour and philosophy can feel rather forced at times. Whether this is due to the script or the performances, I’m unsure – but there’s a good chance it’ll improve as the run goes on. In terms of cast, it’s Samuel Anderson’s Luke and Adam Deacon’s Tony who take the leading roles. Both have impressive CV’s with Anderson having starred in The History Boys, Emmerdale and Doctor Who, and Deacon starring in Brit films such as Kidulthood and Adulthood, as well as directing spoof film Anuvahood. Playing brothers in The Retreat they have an easy chemistry together – instantly believable as siblings who’ve been separated by years of differences and disagreements, and their interactions together are both hilarious and moving. Anderson does his best to make the often-patronising Luke a sympathetic character, and Deacon is a real stand out as Tony – his constant jokes a thin cover for the vulnerable and damaged soul at the heart of the man.

Yasmine Akram’s Tara is a more supporting role to the two brothers, so lacks in terms of character a little compared to the two leads, but Akram delivers a strong performance with Tara a warm, funny, yet ultimately rather complicated character. Akram’s unforgettable entrance as Tara, covered head to toe in green body paint, is unforgettable– and whilst the real story at the heart of The Retreat is the relationship between the two brothers, Akram is an integral and beautifully delivered part of the evening’s entertainment.

Fans of Peep Show may not be expecting quite as much warmth and emotion as is on display in The Retreat, but it’s there constantly throughout – with the humour making way for moments of genuine feeling repeatedly throughout the show. That may be, in part, due to the direction by Kathy Burke – an actor and director who, in my opinion, can bring warmth and humanity to any role she comes across.

There’s no distancing here – the staging, light and sound welcome the audience into this small hut in the Scottish Highlands, with the relatively small size of the theatre allowing the characters to be exposed to the audience – removing some of the distancing that is provided in a regular theatre and making the experience all the more immediate.

The Retreat is a clever and thoughtful contemporary play that explores modern day issues with warmth and fantastic humour. Strong performances enabled by superb direction allow this intelligent and entertaining script to shine. Go for the laughs and stay for the compelling commentary on life in the 21st Century – it’s not perfect but it’s an enjoyable watch and an impressive debut play by writer Sam Bain

The Retreat runs at Park Theatre until 2nd December 2017