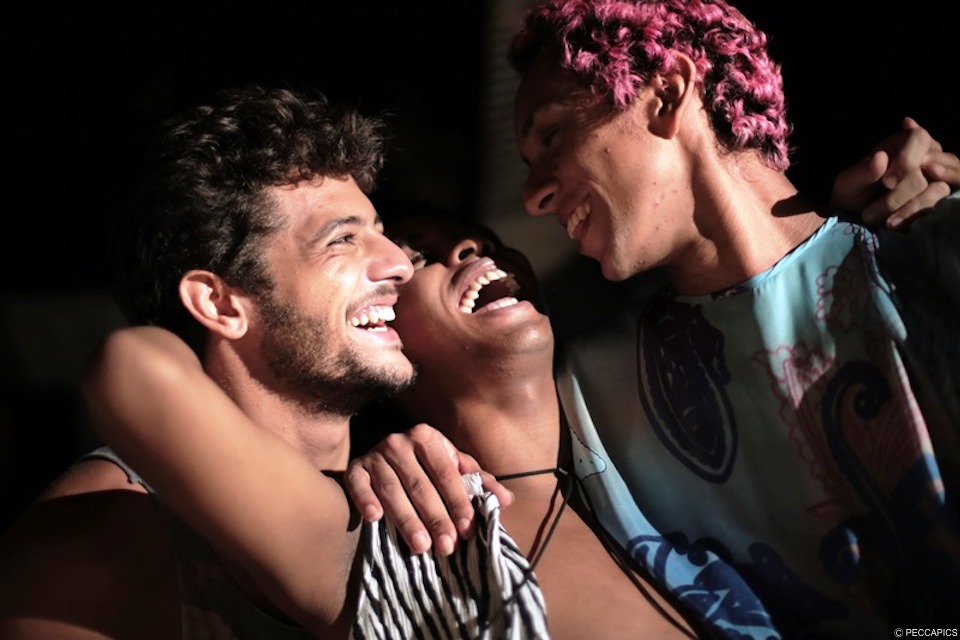 Life is one big party for the characters in the new film Body Electric.

Elias (a sexy Keiner Macedo) is the assistant manager in a factory somewhere in Brazil. He’s only 23 and quite young to hold such a responsible job, but his female boss, who is always jet-setting from here to there on business, trusts Elias completely to run the factory while she’s gone. It’s a factory that makes clothes, and Elias sees his fellow employees not just as co-workers but as friends, and they all spend lots of time hanging out with each other after work and on weekends.

They’re all friends, very close friends. And when a new employee starts work at the factory, a West African man called Fernando (Welket Bungue), Elias welcomes him into the fold and nothing much changes for these happy-go-lucky group of people who work hard and play much much harder.

And play is just what Elias likes to do. He’s openly gay at work and in his personal life, and there appears to be no issue with his colleagues when he takes up with fellow young co-worker Wellington (Lucas Andrade). Wellington introduces Elias to a gaggle of drag queens with a queen bee who wonders out loud where all the fabric Wellington and Elias brought to them comes from. But it doesn’t matter for these folks, life is one big party, and with that comes alcohol and sex.

In Body Electric, director Marcelo Caetano relies on lots of lingering shots to portray his cast in ways that make them look and feel so real, it, at times makes you feel like you’re eavesdropping on their lives, and loves. But Body Electric is all about Elias and how happy he is, and how happy his co-workers are who toil away at the factory day in and day out, and we are very happy for all of them.

Available to buy from Amazon