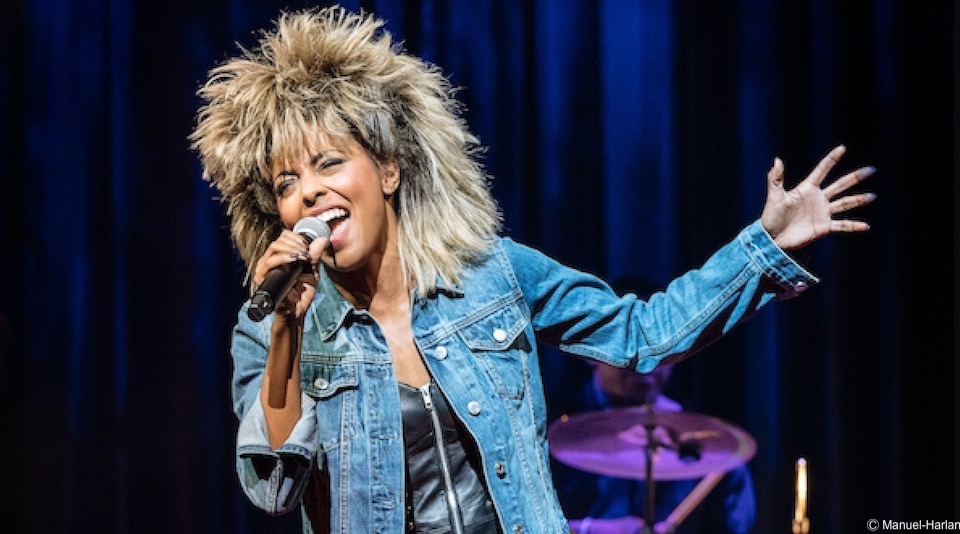 Adrienne Warren is astonishing as Tina Turner in the new musical aptly titled Tina. Now playing at the Aldwych Theatre, Tina charts the ups, and many downs, of Tina’s life. Born as Ann-Mae Bullock, in 1939, we are shown, first hand, how, as a little girl, she was brought up in a violent household where her father hit her mother, causing her mother to move away with her sister (leaving Ann-Mae behind).

Then we are all aware of Tina’s 16-year violent relationship with Ike Turner, a relationship that she got into when she was very young (16), and which produced two boys. But once this depressing part of the story concludes (depressing because of the emotion and violence) we get to the good stuff;  how Tina reinvented herself ( with the help of manager Roger Davies – played by Ryan O’Donnell) and became a music superstar all on her own, and then had several chart-topping hits in the 1980s and 1990s, raising her level to icon status.

All of this story is told in the songs of Tina (and Ike) Turner. ‘What’s Love Got To Do With It’ is, strangely enough, sung in an airport lounge, while ‘I Can’t Stand the Rain’ is performed with, yes you guessed it, umbrellas, while there are other questionable sequences that don’t quite fit the music. And some of the wigs most of the men wear to reflect the time period look a bit silly and fake at best, plus a couple performers go a bit overboard in their acting in a couple dramatic scenes. Kobna Holdbrook-Smith as Ike Turner doesn’t quite nail the role. However, it’s Warren’s show. Every time she opens her mouth and sings it’s electrifying, and without her, the show would not be a hit.

Warren is just simply amazing, simply the best, and at the end, the audience is treated to a few more songs, and Warren truly does deserve the standing ovations she receives night after night after night. Warren is a star in her own right.