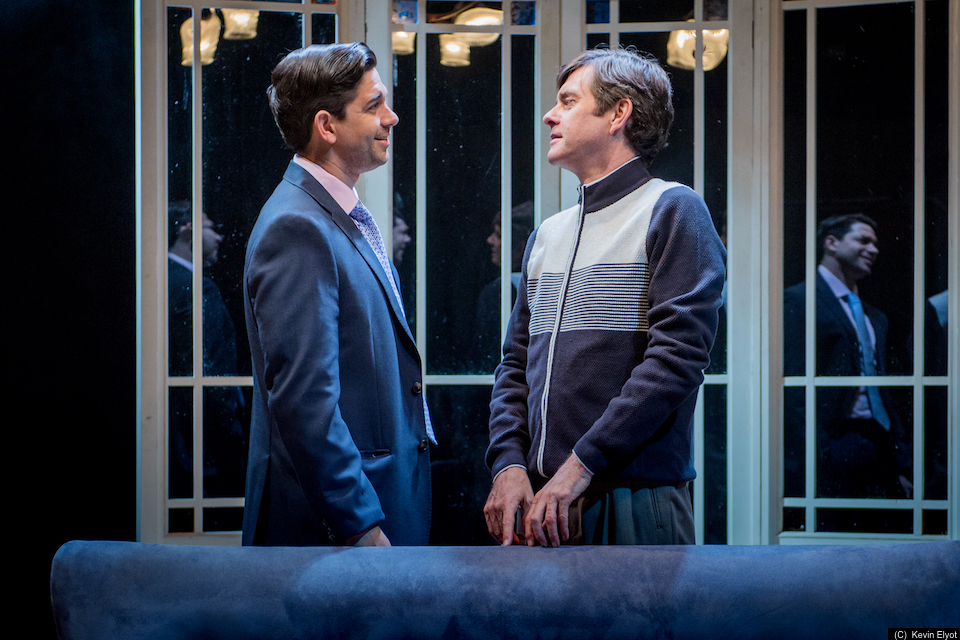 You know a show doesn’t make much sense, when, after seeing it, you and your friends don’t agree on what you’ve all just seen. To say Twilight Song is a bit confusing is putting it mildly.

Now playing at the Park Theatre in Finsbury Park, is the late British playwright Kevin Elyot’s final play. Elyot, who wrote the award winning and very successful play My Night with Reg: (which was turned into a film in 1997), died in 2014, finishing Twilight Song right before he passed away. But the play itself is not a very good testament as a cap on his career – it’s a show muddled with characters and storylines that go back and forth in time that unfortunately raises more questions than answers in a play that’s a very very short 75 minutes.

Most of Elyot’s plays have direct gay themes or gay undertones (My Night with Reg was very similar to the groundbreaking 1969 film Boys in the Band), and Twilight Song is no exception. In a nutshell, it’s a play about a middle aged man Basil (Paul Higgins) who lives in a North London terraced house (with an unfinished balcony) with his mother Isabella (Bryony Hannah) in the present day. Flash back to 1967 and Isabella is pregnant. But in both the present and the past (to and including a scene set in 1961), the family has secrets, secrets that they keep to themselves, and even secrets that they do not want to admit to themselves. Basil (Paul Higgins) pays an estate agent (Adam Garcia) money, not for a real estate transaction, but for sex, which happens too suddenly and out of the blue and out of character. Then Isabella unrealistically falls into the arms of the gardener (Garcia again). Meanwhile her uncle Harry (Philip Bretherton) pines for Charles (Hugh Ross), but Charles is broke because he is being swindled by a hustler (Garcia again). Twilight Song takes us all too rapidly through this family’s 50-year history too quickly. Throw in some cock talk, the unknown origin of blood on the sofa, and a very very short running time, and it doesn’t leave us much time to get to know the characters and their motivations. Director Anthony Banks gets excellent use of his actors who all give fine performances, and a set design that’s true to its time (though an annoyingly loud refrigerator in their kitchen really serves no purpose and destroys the play’s tension), but it’s the storyline that doesn’t add up, and it’s shame because it is Elyot’s last work, and it’s being poorly received.

Another one of Elyot’s plays, Coming Clean, will have a revival at the King’s Head Theatre later this year, so perhaps hold out for that one if you can.

Twilight Song plays at the Park Theatre until 12th August 2017