THEGAYUK’s Influential Tweeters of the year 2017 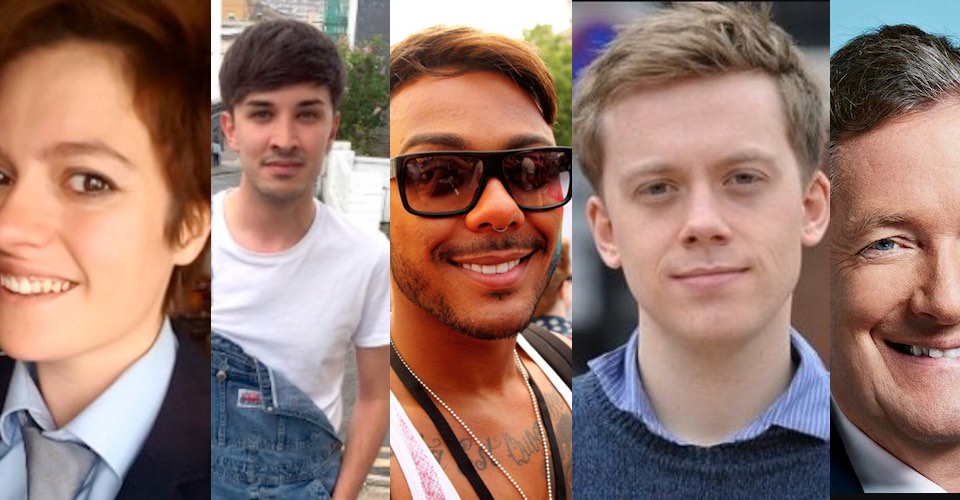 Welcome to THEGAYUK’s first annual Influential Tweeter of the year.

This list represents THEGAYUK.com’s most influential tweeters in the UK. Just a selection of people who got conversations flowing in 2017. Some of our Tweeters of the year courted controversy and through their actions, they actually galvanised the community, which is why they were chosen. Others on the list used their platform to seek justice for their cause. Some are just too funny not to give a special mention. It’s fair to say that without them, Twitter wouldn’t be as entertaining, insightful, infuriating or indeed, influential.

In no particular order:

One of the funniest tweeters and Instagrammers in the UK. There is not a gif or meme that Marcus doesn’t know about. If you’re ever feeling low and need a lift, visit Marcus’s accounts for an instant mood lift. Follow here

Starting out relatively unknown at the beginning of 2017, Monroe became a household name and one of the most talked about people in the UK thanks to being outspoken on the issue of race in 2017. Earlier this year, her comments on racism found her ousted as a model by L’Oreal, which led to a backlash against the cosmetic giant. Her dismissal didn’t stop Monroe from making a bigger platform for herself and the causes she believes in. Since then she has gone on to pen various articles on being trans and non-white in the UK. Follow here.

Me on my way to get a meal deal from Tesco after spending the morning writing 200 words about how to fist safely. pic.twitter.com/thBGQjYxMp

Brilliantly insightful. Dylan is the editor of the weekly gay listings magazine, QX. Charged with ensuring that QX hits the streets of Soho every week, on time, Dylan has overseen some incredible, diverse covers for a magazine, which has 52 of them to create each year. For insight into the nightlife of London or generally being an out there kind-of-guy give Dylan a follow. Follow here

Whether you agree with his comments or not, Piers has certainly raised awareness about gender fluidity and non-binary people this year. He has devoted countless segments on Good Morning Britain to invite people who identify as non-binary, transgender or genderfluid to question their lives and how they identify. His response though has always been met with condemnation from many in the LGBT+ community. Follow here

He has ‘An infuriated gay man” written in his profile and for many, he is just that, but it cannot be denied that Ryan cares deeply about social issues facing the LGBT+ community. After leaving Gay Times in 2017 in a huge shake-up at the magazine, Ryan simply tweeted, this:

When Owen Jones tweets, people listen, even turning out in their droves. Although it has to be said that he receives a lot of hate for his efforts and took a leave of absence from Twitter after he was sent torture and death threats. Look out for rebel rousing from Owen when President Trump comes to the UK in 2018. Follow here

Dean Eastmond – LGBT+ Advocate for those living with cancer

Before his death, Dean launched Hiskind Magazine and was an incredible voice for LGBT+ people living with, getting treatment for and survivors of cancer. Tragically he passed away in September 2017. However, his magazine went on to release another issue and his hope lives on in his Twitter feed. Follow here

Jack sued Katie Hopkins this year and won. The food writer has had a rollercoaster of a year, successfully winning a libel case against Hopkins and then running in the General Election as a candidate for the National Health Action party. Jack ran on a pledge to stand up for “Healthcare. Services for people with disabilities. Living standards. Jobs. Decent homes.” Jack quit the campaign trail after death threats were sent to the writer’s home. Follow here

Our second posthumous recognition is for Martyn Hett, whose death in the Manchester Arena terrorist attack made us all take a closer look at how we choose to live our lives. His name trended on Twitter days after the bombings as he was recognised as an incredible engine for change and an inspiration on how to live life to the fullest. He was recently remembered again on the platform for what would have been his 30th birthday. Follow here

Christine is a political activist who was awarded an MBE in 2005 for her work representing the transgender community. Christine is also known being the former vice president for the Press For Change campaign, which focusses on the rights and treatment of trans people in the UK. Follow here

It is important to note that our decision to make someone an Influential Tweeter doesn’t and should suggest that they are necessarily an ally to the LGBT+ community in the UK. It is our belief that those who create space for conversations surrounding LGBT+ issues, who have huge audiences are influencers.