This is the world’s largest Key Lime Pie 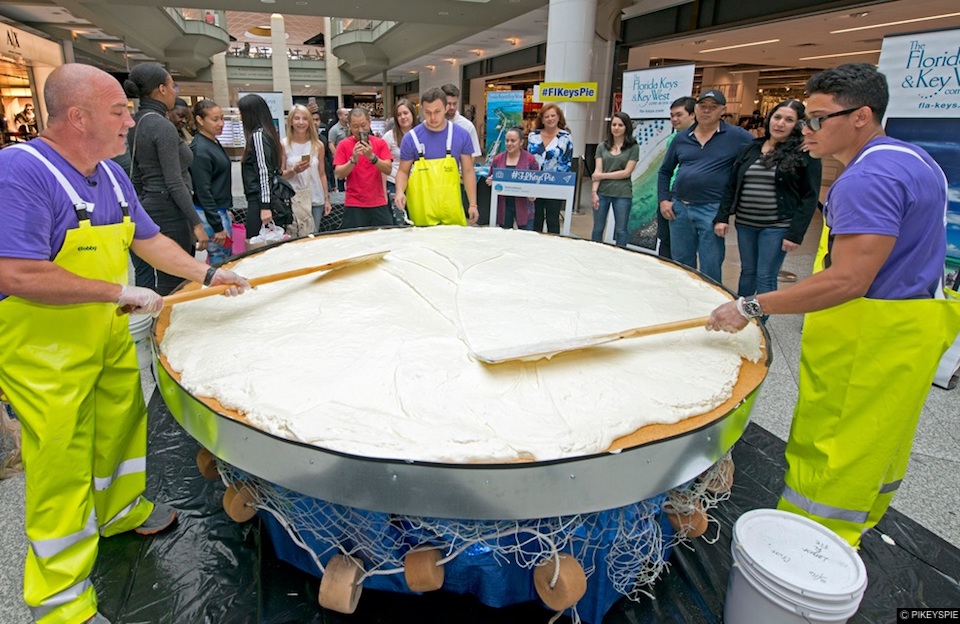 Culinary masters have created the world’s largest Key Lime Pie, one of Key West’s most famous of exports.

Florida Keys, one of the gay-friendliest places in the US,  has just delivered one epic pie, overseen by chef and restaurateur Bobby Stoky who led a culinary team on Saturday, 24 March, to prepare a gargantuan Key lime pie to serve about 2,000 people.

Measuring 8 feet in diameter – the size certified by the World Record Association as the globe’s largest – the giant pastry was made from ingredients including the juice from 5,766 Key limes, 200 pounds of graham crackers and 55 gallons of sweetened condensed milk. The finished dessert weighed around 1,000 pounds.

“It’s a balance between sweet and tangy that makes this pie absolutely delicious,” Stoky said.

Key lime pie is the official pie of Florida, as designated by the state legislature in 2006. Most historic accounts indicate Key lime pie was first created in the kitchen of the Curry Mansion in Key West and referred to as Key West pie.

“The 8-foot pie was prepared in Atlanta, Georgia, at an upmarket shopping mall to showcase the culinary delights available to visitors holidaying in the Florida Keys”

International visitors keen to get in on Key lime pie action can travel to Key West in early summer to attend the annual Key Lime Festival. Running from 30 June, to 4 July, the festival’s events include a ‘Mile High Key Lime Pie Eatin’ Contest’ on America’s Independence Day, where competitors attempt to be the first to devour a 9-inch Key lime pie.