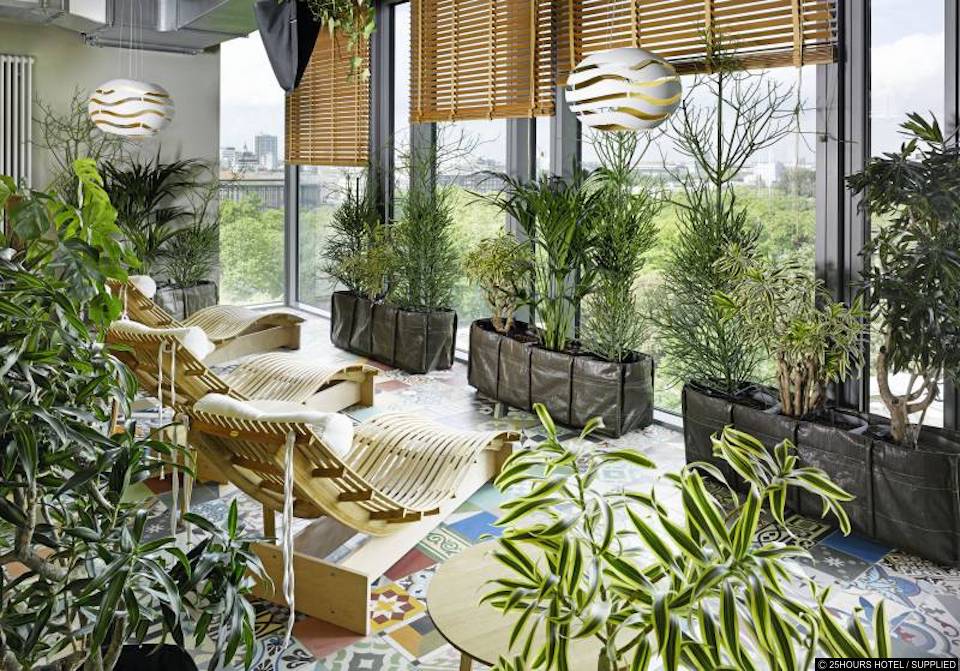 When the 25 Hours Hotel opened in the City West of Berlin, it added a note of culture, nature and cosmopolitan all under the roof of what used to be a 1950’s grotty industrial office building.

I could probably count on one hand the number of fun hotels that I’ve stayed at and this is definitely one of them. The hotel is neighbours with the iconic Berlin Zoo and so the theme of being in a jungle is carefully distinct especially with a personal hammock in your room to crafty spaces to lounge, dine and drink. Since the cocktail scene in Berlin has taken off and caught up in the growing desire for craft drinks and an obsession with rooftop bars, this hotel plays host to the popular Monkey Bar and Neni Restaurant – both positioned on the 10th floor with 360-degree panoramic views of bustling Berlin.

Along with my guest, we are often suspicious of hotel restaurants and long lines of people waiting to gain entry into any bar however whilst dining at Neni with one of South Australia’s renowned food bloggers our doubts rapidly melted away into the leafy surroundings and heavenly balagan style dishes. After dinner which was showered with dramatic views and superb service we cut across the corridor and entered the Monkey Bar where we immediately noticed why the line to get into this celebrated bar was impressive – even on a random Tuesday night.

When you eventually pull yourself away from the hotel you can adventurously explore Berlin with one of the hotel’s bikes or even one of their Minis (yep this is one of the impressive perks for guests). Make your way to the former East and weave through the updated streets until you arrive at the Hackesche Höfe.

Once you have worked up an appetite the simply named Hackesche Hof Restaurant & Café is one of the areas favoured dining spots where a feast of people watching and exceptional food and drink are served. This restaurant has some impressive photos of the area which makes a dining experience here quite classical. Also nestled in this courtyard area is The Chämaleon Theater a unique theatre stylishly set in an art nouveau ballroom where cabaret style seating allows guests to eat and drink during performances. Hosting the latest contemporary circus creations such as the charismatic Scotch & Soda, described as a whiskey-fuelled circus party accompanied by live music.  The Chämaleon Theater continues to break all language barriers by welcoming the arrival of the forthcoming show Parade where acrobatics meet multimedia.

British Airways conveniently has a direct route from London City airport to Berlin Tegel, however, be warned with all the monkey business in Berlin you will need more than 25 hours in this whimsical city.