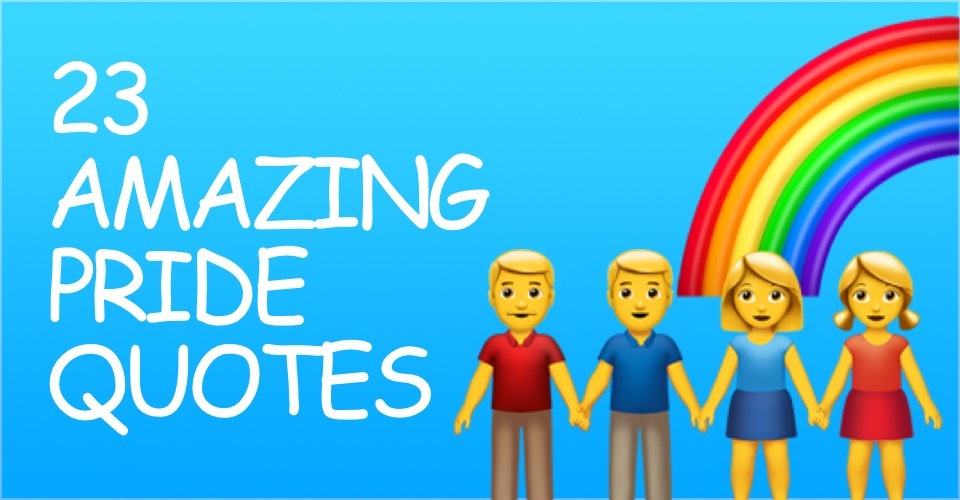 “If a bullet should enter my brain, let that bullet destroy every closet door.”
– Harvey Milk

“Being gay is natural. Hating gay is a lifestyle choice.”
– John Fugelsang

“Why is it that, as a culture, we are more comfortable seeing two men holding guns than holding hands?”
– Ernest Gaines

“It always seemed to me a bit pointless to disapprove of homosexuality. It’s like disapproving of rain.”
– Francis Maude

Marriage should be between a spouse and a spouse, not a gender and a gender.
– Hendrik Hertzberg

At some point in our lifetime, gay marriage won’t be an issue, and everyone who stood against this civil right will look as outdated as George Wallace standing on the school steps keeping James Hood from entering the University of Alabama because he was black.
-George Clooney

I hate the word Homophobia. It’s not a phobia. You’re not scared. You’re an asshole.
– Morgan Freeman

People only attack what they fear.
– Petrie Hosken

When all Americans are treated as equal, no matter who they are or whom they love, we are all more free.
– Barack Obama

We’re sick of hearing people say, “That band is so gay,” or “Those guys are fags.” Gay is not a synonym for shitty. If you wanna say something’s sh*tty, say it’s shitty. Stop being such homophobic assholes.
– Pete Wentz

Is being gay a phase? Alright then… It started when I was born and it’ll end when I die.
– Jake Hook

When I was in the military they gave me a medal for killing two men and a discharge for loving one.
– Epitaph of Leonard P. Matlovich

My lesbianism is an act of Christian charity. All those women out there praying for a man, and I’m giving them my share.
– Rita Mae Brown

Don’t hide behind the Constitution or the Bible. If you’re against gay marriage, just be honest, put a scarlet ‘H’ on your shirt, and say, “I am a homophobe!”
– Henry Rollins

If homosexuality is a disease, let’s all call in queer to work: “Hello. Can’t work today, still queer.”
– Robin Tyler

War. Rape. Murder. Poverty. Equal rights for gays. Guess which one the Southern Baptist Convention is protesting?
-The Value of Families

My mother took me to a psychiatrist when I was fifteen because she thought I was a latent homosexual. There was nothing latent about it.
– Amanda Bearse

Rather than ignore those who choose to publish their opinions without actually talking to me, I am happy to dispel any rumors or misconceptions and am quite proud to say that I am a very content gay man living my life to the fullest and feel most fortunate to be working with wonderful people in the business I love.
– Neil Patrick Harris

My thoughts on gay marriage are that everyone has the right to love and be loved, and that’s the position I take.
– Nick Jonas

Being transgender, like being gay, tall, short, white, black, male, or female, is another part of the human condition that makes each individual unique, and something over which we have no control. We are who we are in the deepest recesses of our minds, hearts and identities.
– Linda Thompson