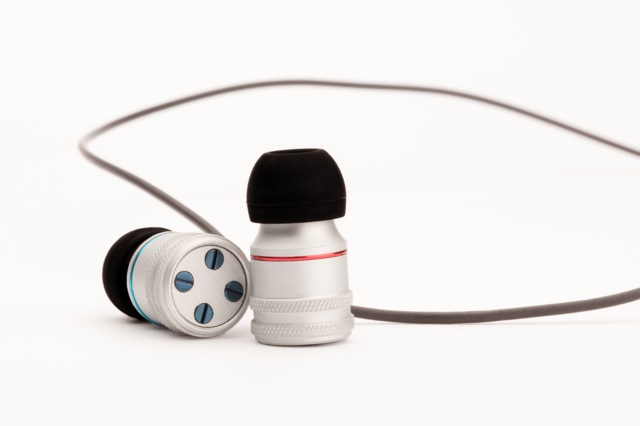 Ever since the dreaded little ubiquitous white ear buds from a certain brand were being popped into the nations’ ears, we’ve been duped into believing that the quality of music just doesn’t matter.

I’m putting my cards on the table, my preferred choice of headphone are an over the ear Bose or Bang and Olufsen headphone, so when I was handed a pair of in-ear Musical Fidelity EB-50 buds I have to admit I was dubious of the lesser known English electronics and sound brand, however, this maybe the start of a new love affair.

First thing you’ll notice is the plentiful extras you get with your EB-50s, some standards, like the little pouch to store your buds and a mini jack to 1/4 inch jack, but Musical Fidelity goes further with providing seven rubber ear tips to aid finding the absolute perfect fit and a micro-fibre wipe cloth to ensure your buds look in tip top condition at all times. The rubber tips allow you to block out almost all background music. To test this out I took the head-buds onboard a flight to Spain – they worked perfectly, the engine noise was dulled to a barely audible background noise – and once again I road tested them on London Underground’s Piccadilly Line on the trip back from Terminal 4, once again I was stunned by the product’s external sound deadening abilities, the manufacturers claim up to 96% noise cancellation – I would agree with this figure, providing you have the buds tightly fitted to your ear.

Designed in England the ear buds themselves are finished in military grade aluminium, giving them a rugged, masculine feel, with a distinctive retro look. The EB-50s also have a built in hands-free microphone for use with your phone, which also acts as a pause function. The EB-50’s also work perfectly with your iPhone meaning that you can use the handsfree button to talk with Siri.

The sound test – As consumers we’re so used to listening to music, where the sound has been coloured by the speakers – the clarity from the EB-50s is actually a revelation from an audio unit so small. It offers a super flat response with a very low distortion, due to its anti-resonant internal construction. What does that all mean? It means you actually feel like you’re in the control room at the studio. The reproduction is as the producer intended. The sound reproduction is marvellously honest and actually, thankfully, seems to limit the digitalised feel to modern music, but it can make for a tiring listening experience. If you’ve ever sat in front of a quality pair of studio monitors you’ll understand. Luckily, however, the headphones are exceptionally responsive to your favourite EQ settings on your playing device – and with one swift setting change the headphones allow the meatiest of kick drums to really thump with an authority which leaves most headphone brands just a pip on the horizon.

Cons: Can be a little tiring on a flat EQ, quite pricey.

All products are priced at £149 and are available from www.musicalfidelity.com