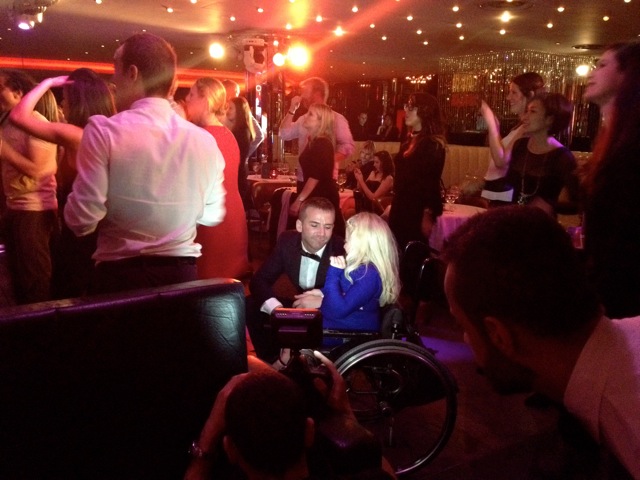 ‘Shaken and Stirred’, the newest cabaret night to hit the Soho Scene is the brainchild of Samantha Renke and Zak Black, also known as ‘Verve Couture’. Their bespoke entertainment company, established in 2006 is holding the event to raise money in aid of the Brittle Bone Society. This evening of music, burlesque and Brazilian Dance takes place at Floridita, one of London’s finest live venues. The bar has a Latin American feel with a delicious A La Carte menu.

We were greeted by the hostess and guided to our front row table, as the house band plays. The venue is laid out in twenties style cabaret seating with waiters on hand to attend to your every need. We got the chance to have a quick chat with Sam before the show started and to hear a bit more about how the event came about. Her dedicated work as a trustee for the Brittle Bone society over the last 4 years led them to have this event in aid of the charity.

‘We strive to get as many diverse acts as possible and get acts that fit in with the theme, its a black tie event and we want to set the right tone. The burlesque aspect really mirrors the environment and Zak hosts the show, taking the audience from the beginning to the end and he builds a real rapport with them. Because its early stages we are still sourcing new and exciting acts. Zak first did an event for Gay Pride at the venue and developed a great relationship with them, which is where Shaken and Stirred began. Its exclusive to Floridita and we are hosting the show on their behalf. Verve Couture is a bespoke entertainment company and I would like to collect people find various acts and move on to corporate functions. I want Zak to become more involved in the shows as he is a massive talent, as a singer/songwriter and as Director of the company. Verve Couture is all about diversity and when we are seen together socially or in a business environment people don’t know what to expect, that’s why I like working with him.’

We asked Zak about his vision for Verve Couture, where the name came from and where does he see the company in 5 years time:

‘I created the name “verve Couture” for a few reasons. Firstly – the literal meaning of both words perfectly sums up what the company and its participants are all about. “Verve” means Zip, zing, lively, liveliness, current, on the pulse and full of life… And “Couture” as we all know means, avant garde, tailor made, cutting edge and unique… Also, Verve Cliquot has long been my favourite champagne and I like the association! Everything I have planned for the company is already in motion…Celebrity weddings, beautiful music halls, jazz clubs, night clubs, glamourous events, charity and television have all been strings to our bow. In five years, I see our legacy fulfilled and the company being to top bespoke entertainment company in the UK and internationally. Also, I see more work overseas.’

Zak, our charismatic host introduces the first act for us, a duo of Ella Marie on vocals and Jack V on piano with their live lounge style numbers, that accompanies our first course of Avocado and Palm heart salad. Jack later serenades the room with his soulful voice and creates a real connection with the audience. The next act is Mambo, a Spanish singer with a huge Diva like voice and a stage presence that fills the room, bringing some audience to their feet with her performance of the Dreamgirls classic by Jennifer Hudson ‘And I Am Telling You’. The shame is however that she performs to prerecorded click tracks and not a live band, which sadly takes away from the ‘live’ performance aspect. The third act is the burlesque performance of the evening ‘Anna The Horrible’, a fire act that is truly spectacular and the things the woman can do with a hoop on fire are quite something to behold.

Sarah and David are a Brazilian dance duo who perform a show stopping dance duet, who then go on to give the entire room a Brazilian dance lesson, getting everyone who has had a few glasses up on the floor and dancing. The surprise final act of the night is Charlotte Wakefield, currently playing ‘Sophie’ in the west end show ‘Mamma Mia’, who sings a few classics from the show to close the evenings events.

Sam and Zak really achieve the goal mentioned earlier, to provide a diverse variety performance with something for everyone. Their next ‘Shaken and Stirred’ event at Floridita will be on January 30th and promises more of the same, so if cabaret is your bag this is a great night to get on down to and shake some Latin booty in the heart of Soho and head on out to your favourite haunts after.