Caitlyn Jenner to cover “Dude Looks Like A Lady? 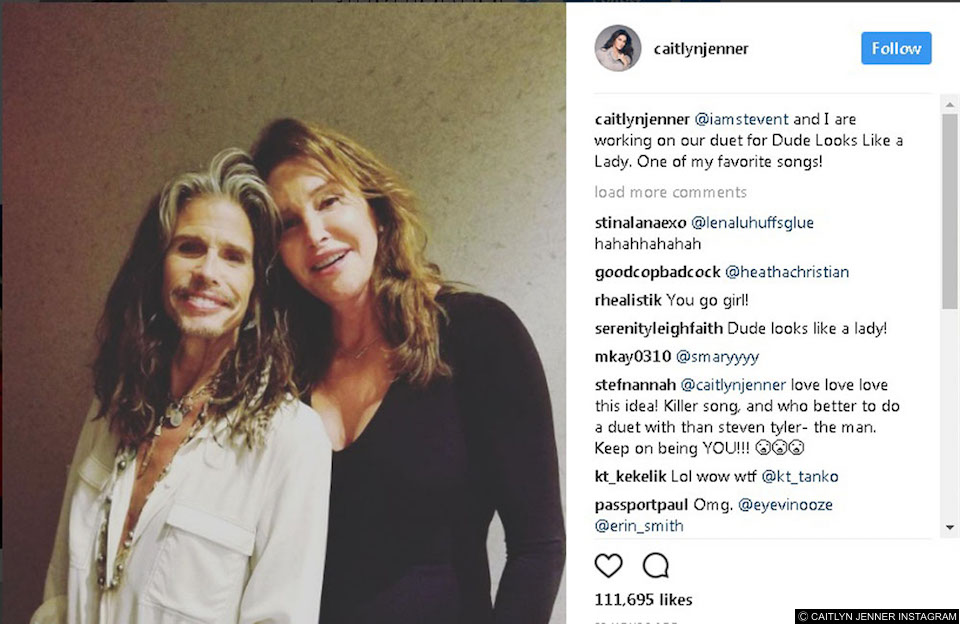 Caitlyn Jenner has joked she and Steven Tyler are recording a new version of his hit ‘Dude Looks Like a Lady’ because the Aerosmith song is her “anthem”.

Caitlyn Jenner has joked she and Steven Tyler are recording a new version of his hit ‘Dude Looks Like a Lady’.

The 67-year-old former Olympian turned reality TV star revealed the Aerosmith track became her “theme song” when she was struggling with her gender identity and the 69-year-old rocker was pleased to know he’d been able to play a part in giving her comfort.

Caitlyn shared a picture on Instagram of herself and Steven on Tuesday (18.07.17) and wrote,

@iamstevent and I are working on our duet for Dude Looks Like a Lady. One of my favorite songs! (sic)”

And she later appeared on ‘Jimmy Kimmel Live’ to explain the photo.

“If you noticed today on Instagram, I posted a picture of me and Steven Tyler.

“I was at a fundraiser in Minneapolis, and he was the entertainment. I had met him, I think, once, briefly – many, many years ago. But he was sitting there and I’m thinking, ‘I’ve got to go say hi.’

“So, I go backstage after and I look up at Steven and I said, ‘I have had some really, really tough times in my life. For six years, at one point, I stayed in my house, and every once in a while I would get dressed and go sneak out in the dark and drive around. Your song, ‘Dude Looks Like a Lady’ became my theme song, driving around in my little car with my little CD in there, whipping up the tunes and stuff.

Elsewhere on the talk show, the I Am Cait star asked the 49-year-old host to “spy” on her daughter Kendall Jenner because Jimmy lives across the street from the supermodel.

“If I brought over some binoculars, could you spy down on her? I never know what’s going on in that house.”

“I can see that. No, Kendall is a very great kid.”