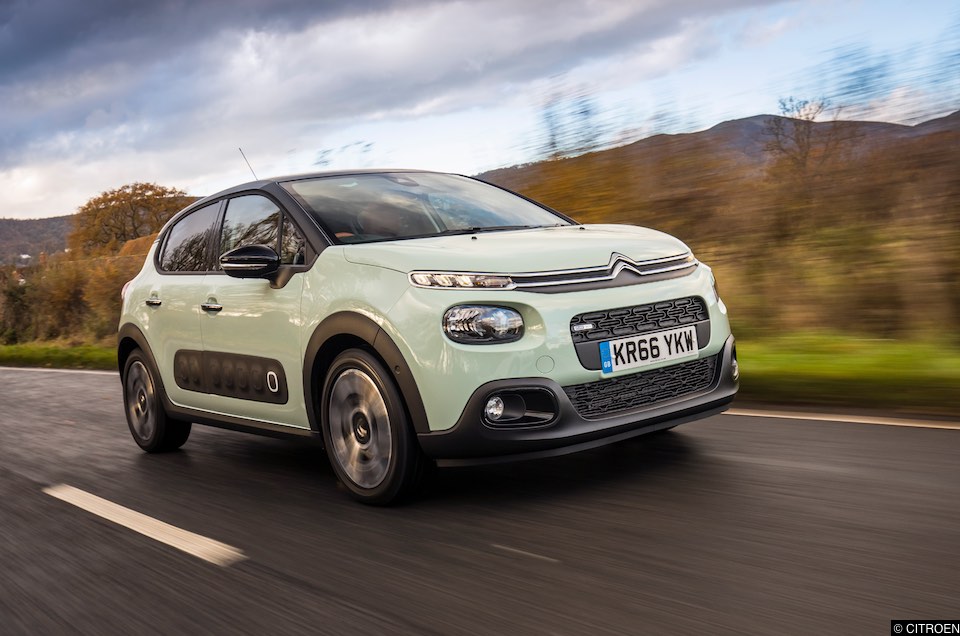 They were not wrong about the new C3 being eagerly waited for.

Last year THEGAYUK reviewed the outgoing model. A model I didn’t really care much for in the beginning. By the end, it was a different story. It had taken Citroën about 14 years to get it right and just when they did they decided to start all over again. So is the new C3 better than the old or have Citroën got to start all over again?

If there is one thing you can be assured of, it is that Citroën has not failed in making the new C3 ready for improvements. The C3 I was given was pleasant enough. It did everything right. The engine was the wrong one. If it had been fitted with their 1.2 three cylinder petrol engine as in the old C3 we tested, I would probably have been happier. The diesel just didn’t hit the right spot for me. It lacked the verve and excitement of the little petrol unit. That little unit is thankfully available in this Flair model and for over £1000 less. Buy the petrol engine.

Now that my biggest moan is out of the way, is the new C3 good. Thankfully it is. The car has grown in size which I don’t know if that is a good thing or not. The joys of a city car are that you can go anywhere and park it anyplace. The new C3 has one disadvantage over its slightly larger cousin the Cactus, and that’s the bumpers. More lack of them. The C3 sports Citroën’s cool airbumps on the side but lacks anything on the bumper corners. Instead, it leaves the headlights low and vulnerable. Thankfully it is fitted with big plastic wheel arches.

Quirky kit aside, the inside is ok. It’s built to a price and does the job. There are some nice carry over pieces from the cactus are included like the door handles. and contoured door cards reflecting the opposite of the airbump. This model also came with the £150 red ambience option. It’s not to my liking. Less so when the outside was duck egg in colour. What you do get on this new model is ConnectedCAM. It allows you to take pictures as seen from the front of the car and send them to your friends. A little gimmicky but we like gimmicks. Sometimes there just isn’t enough of them in any car we test.

What I couldn’t find on the options list was the enlarged front screen into the roof as fitted to the Picasso models. It made for a bright airy interior. What I didn’t like on the inside was the brightness of the infotainment system. It was too bright and didn’t seem to alter with the lights unlike the facia panel. Until I found the setting I was having to turn it off.

On the move, the 1560cc diesel engine did a great job if a little harsh and with complaints. This is a first for me to moan about a French diesel engine. They usually behave like petrol engines. Sadly this 110hp unit ran out of puff. It might produce all of its power at a lowly 3750 rpm and this then returns in rapid gear changing and hoping the high torque of 151 Ib.ft at 1750rpm will carry you on. It felt lacklustre. I couldn’t engage with it. It annoyed me and more-so because I wanted to like the new C3.

On the move, the suspension was compliant with most undulations. It did, however, reveal a harshness that was absent from the previous model. It was wobbly Citroën with Germanic crashing. At first unsettling but you grow accustomed to it. Like the handling. That was fun. It handles rather well when thrown about. Due to the engines dynamics, you need to alter your driving style considerably to get the best out of it. It was still better than the DS3 Cabrio I tested.

There are many things about the new C3 that I do like. It looks ok. Actually, it looks brilliant. Thankfully Citroën are now able to make their vehicles reflect the brand and C3 now sports the new corporate Citroën front. Cactus tested the waters and it is now the approved face. It grows on you because it is so different. It sort of reminds me a dolphin. They are cute and like the C3 they have personality.

The price is also rather good too. It is now cheaper than the outgoing model. All this new development and the add-ons costs £18,845 as tested.

There is a lot to like about the new C3. I can’t say love about it because I didn’t feel it this time. Perhaps because I wanted it to be so much better. It’s not. It’s no worse, it’s just that l don’t like the engine. Buy the petrol.

Engines lack of puff at speed