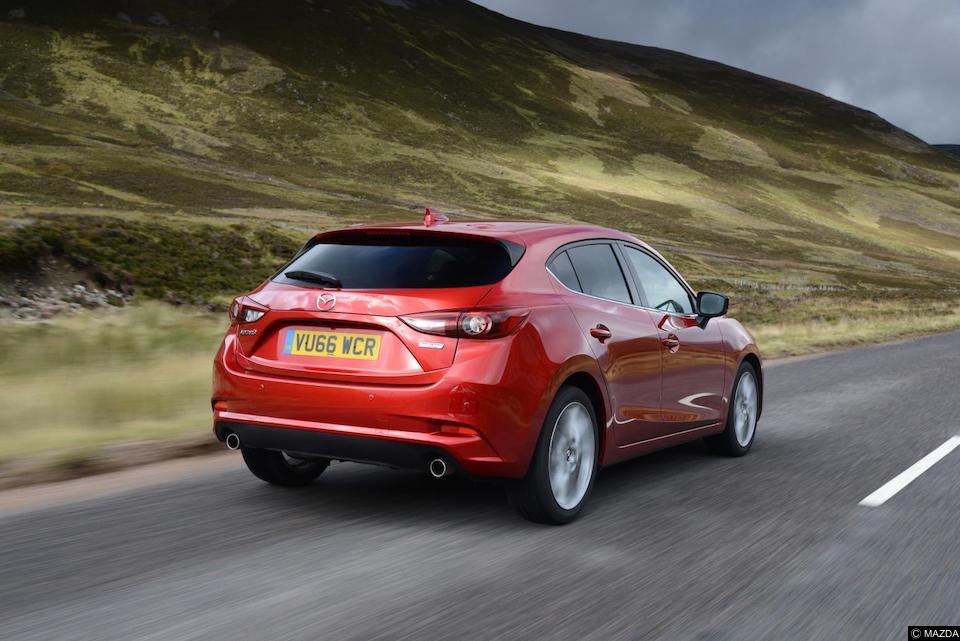 Mazda has a lot riding on their new Mazda 3 model and after my enjoyment with the MX5 l had high hopes for it too. Like other Japanese manufacturers, they changed the way cars were built in the 70s when reliability on a cold wet morning was more important than looks and parts availability across Europe.

40 years later does the offering from Mazda still do today what the 323 from the 70s did back then?

The 3 has grown up with the rest of the class reasonably well. Mazda have always made a good solid mid-sized family car that appeals to everyone but the young. They have never had that “go get ‘em” look. From behind it morphs into an everybody every manufactures hatchback. And this is a shame because the front is very bold and striking. The grill opens wide like a gaping mouth ready to eat all those in front of it. When everyone is making their shapes smooth and round, Mazda come along with a mixture of sharp edges and contoured flicks that blend it together. And then they slap the licence plate right in the middle of it all.

The overall feel of the Mazda 3 is of one that is well put together. Everything works with a mildly notched smoothness that allows the senses to know where a certain switch is unlike some out there where the fluidity of the switch gear feels too floppy and loose. The standard centre control knob that allows for movement around the heads up infotainment system works well. So well that it is pointless trying to use the touch screen. Its reactions to inputs are either overly sensitive or  not working at all. At one point I thought I was going to push my finger through the screen! On the move it doesn’t allow the touch screen to be used anyway.

Sadly it doesn’t get any better the further you dig inside. The cabin lacks so much of the expected norm these days like illuminated window buttons and door handles apertures. Scrabbling for window switches and mirror controls literally went out in the dark ages but still, Mazda feel there is no need for this touch of expectancy. And then there is that ruddy awful carbon fibre trim! I disliked the stuff in the 2000s and it is now out of date on a 2016 hatchback. Mazda though seems to love it and fit it to most of their range.

There are other areas where the Mazda 3 falls flat on its face in the interior and that is around the column stalks. The moulding lines are more clear than on a plastic toy in a Kinder egg. It gives you in one hand and then takes it away in the other. There is great opposition out there in this segment that the Mazda 3 has to take on and it is cost cutting bits like this that kick it to the ground.

Thankfully the engine and dynamics underneath can more than makeup for this give and take interior. The diesel engine is a wonder of refinement. The smoothness in the 1.5 DOHC 16 valve engine made me question on more than one occasion if I was actually driving a soot wagon. It pulls from the moment you’re on the move too well beyond its maximum in power. Its behaviour more reminiscent of a petrol engine. All this smoothness then came with the added bonus of a possible combined 74.3mpg economy and it got better and better with its well spaced 6-speed manual gearbox. All the actions were light and positive. The seating was beyond ‘just’ right that it made for a driving position that fitted the car to you with no compromises. This made the Mazda 3 feel right.

The fittings of what held the wheels to the body have such positivity that it feels this is where the pocket-money of the Mazda engineer has been spent. Don’t be fooled into thinking the “Skyactiv” sticker is anything to do with wi-fi, Bluetooth or other such entertainment add-ons. It’s all to do with the construction. It’s a lightish car with a taut body. And this adds extra handling characteristics to aid the driver. Sure it would roll in a corner and you would pull off the power before it would with the traction control system. The back could become mildly wayward if you pushed it hard or did silly things like backing off the power abruptly mid corner but you had to provoke like a stick to a snake for this to happen.

The Mazda 3 isn’t such a bad car. It has failings in many areas mainly inside but on the bits that make it go it does it so very well indeed. As a car to clock up the miles you could do far worse than this. It will take you from A-Z with a willingness to visit P-Q-R and S just for the fun of it on the way. For a car that will satisfy your desire in terms of making you feel special, it misses the target so badly. And that’s a shame because it has the potential to be so much more than it is allowed to be. Thanks, Mazda.

Find out more at www.mazda.com