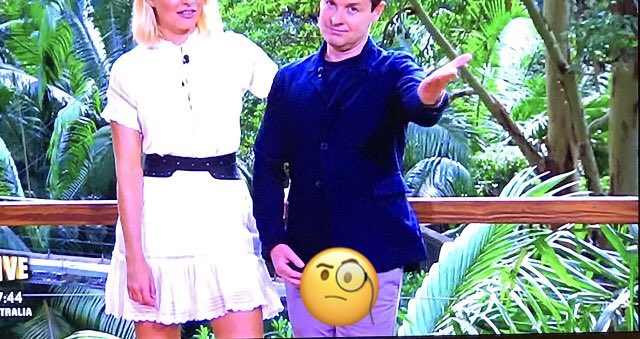 The unfortunate (or fortunate, depending on your viewpoint) wardrobe malfunction happened midway through the show when Declan, standing with Holly Willougby reviewed a huge bulge in the trouser area, with some even suggesting the presenter had a “male camel toe”.

The mishap happened towards the end of the show when the presenting duo was letting viewers know how to vote for their favourite celebrity to win the final, but many viewers at home were too distracted by the huge outline in Dec’s trousers, with at least one viewer admitting that they “couldn’t look away”

The biggest reveal happened when Dec crossed his hands over his private area and seemingly pushed down on his trousers causing the material to enhance the outline the lump in his underwear.

Other asked what the male term for camel toe, to which some suggested “moose knuckle”.

Anyone else confused by Dec’s male camel toe ????? #ImACeleb pic.twitter.com/uLXr2rIGlK

Anyone else confused by Dec’s male camel toe ????? #ImACeleb pic.twitter.com/uLXr2rIGlK

@imacelebrity tell Dec to bin those grey trousers, they don’t do him any favours (male camel toe)

What is the word for a male camel toe?? Lol pic.twitter.com/HKKemMH0DZ

Dude presenting in class has one helluva male camel toe. I can’t look away.