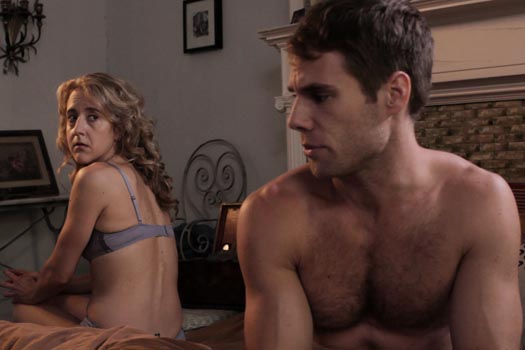 I had some reservations about Gayby. A lot of these ‘gay films’ are usually clichéd drivel, almost always, an unlikely relationship sparks and then it’s just an hour of plot-holes and bad acting.

Jenn, a yoga instructor, and Matt, a comic book store worker, are best friends from college who are now single and in their 30’s. In agreement with a pact they made in their youth, the two decide to have a baby (“Gayby”) together, even though Jenn is straight and Matt is gay. Jenn’s grandmother set her up with a trust fund for if she ever had a child, so Jenn is confident that she and Matt will have the finances to have one. However, Jenn states that she wants to have a baby through natural conception, so the two begin awkwardly having sex.

Gayby was something very different indeed. I found it to be relentlessly charming in every way, with just the perfect amount of drama peppered in. Superbly written and directed by relative newcomer Jonathon Lisecki, It had something that all these other films are missing… A great script.

The awkwardness of the “Attempted Conception” scenes was genius, with just the perfect combination of one liners, curious glances and the various montages of penetration were just divinely cringe worthy.Possibly the stand out performance of the film is that of Jenn Harris. Harris plays the quintessential fag hag (Jen) to the devastatingly handsome Matthew Wilkas (Matt). Harris brings a depressive vibe into a relatively overused character, which is surprisingly, a breath of fresh air.

Although it’s the supporting characters that steal the show, both fag and hag have terrifically bitchy henchmen as it were, the ‘femme-bear’ “Nelson” and the incredibly bitchy “Jamie” (Jack Ferver)

By far the highlight of the film is the fabulous wannabe bear, Nelson, played brilliantly by writer and director Lisecki. The character of Nelson wasn’t particularly appealing to me at the beginning, then suddenly; the character soon manifests as the star of the show. Clearly, Lisecki gave himself some of the best lines, yet you don’t really mind, seeing as he pulls them off in the most gorgeously sarcastic manner.

Gayby’s plot isn’t really anything special; it is essentially a romantic comedy in disguise.

It’s the characters that make the film stand out. They are multidimensional and most importantly they’re ‘real’.

Uncompromisingly jovial, I would certainly recommend Gayby to anyone; it has buckets of charm, something that I find to be a rarity in gay cinema.

BUY IT NOW FROM AMAZON | BUY IT ON iTunes

Lewis is quite possibly the most clichéd gay among us. His wardrobe is mostly sarongs; he is obsessed with Judy Garland and enjoys 1 or maybe 5 cocktails a night. He bases his love life on that of Glenn Close’s in Fatal Attraction. Shockingly he is single. Despite this he is unspeakably fabulous. He is a gay activist and enjoys strolls along the beach…with a large net in which to catch men.