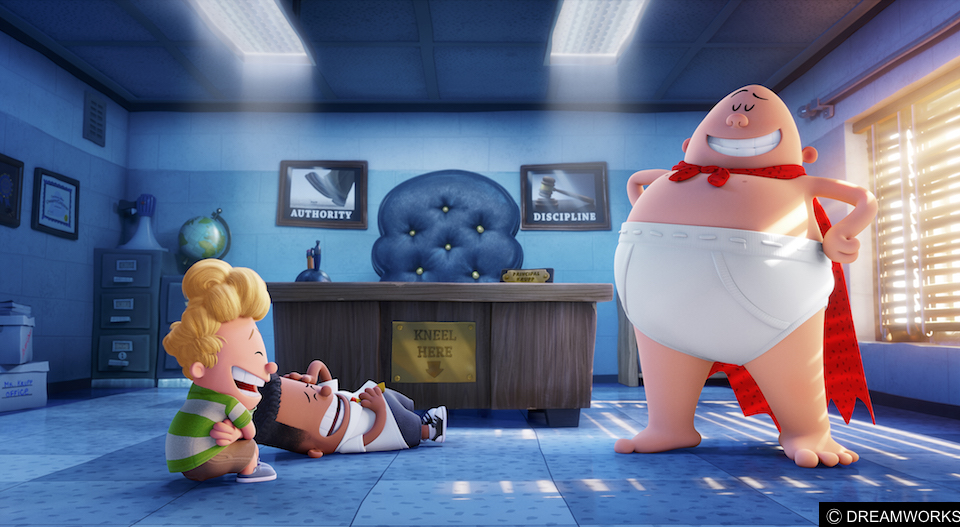 A cheeky children’s series of novels has now been turned into a gleeful and silly animated film. It’s Captain Underpants: The First Epic Movie.

Yes, in case you weren’t aware of this popular children’s book series by Dav Pilkey, it has our superhero fighting crime wearing a cape and his white underpants – Y fronts. But he’s actually the creation (and from the imagination) of George (voiced by Kevin Hart) and Harold (Thomas Middleditch), 4th-grade friends and next door neighbours. They are king of the pranks at their elementary school so it’s no surprise that when principal Benjamin Krupp (Ed Helms) threatens to separate them, they, through their self-created comic book, and after one unfortunate prank that goes wrong, turns Mr Krupp into Captain Underpants! But the boys want to keep Mr Krupp in his superhero kit so he doesn’t turn back into the mean principal who is going to separate them. But they can’t keep him wandering around town in his underpants all the time. They also have to deal with the nerd inventor prodigy Melvin (Jordan Peele) as well as the new mad science teacher Professor Poopypants (Nick Kroll), who is up to his own evil plans.

For the little boy in you (and that would be boys who will surely find this animated film funny, as it’s pretty much that kind of humour), but the rest of us will shake our heads at the silliness of it all.

If this is the first (as per the name of the movie) in a series of more Captain Underpants movies, I’m not too sure it’s going to be a good thing.