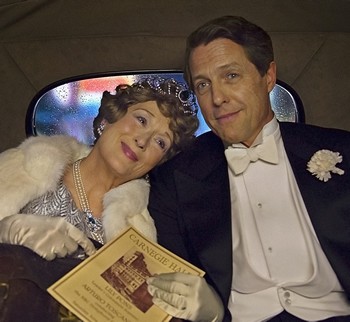 Meryl Streep shines in this touching tribute to the eccentricities of an ageing heiress.

Meryl Streep once again proves that she is one of the world’s greatest actors. This time Streep takes on the role of Florence Foster Jenkins, the ‘world’s worst opera singer’, who was a rich New York heiress who lived from 1868 to 1944.

Florence Foster Jenkins was an incredibly successful performer within her own Vaudeville circuit, owning the audience with her incredible tableaux’s. However  she feels that her musicality (she was a child prodigy piano player, until illness robbed her of her ability to use her left hand) is being stymied. The larger than life character of Foster Jenkins decides that she wants to take up opera again, the problem is that she can’t sing, well at least to the ears that are around her. Whether she didn’t know this or refused to accept it is lost in the annals of history, but Foster-Jenkins was a force to be reckoned with, who once made a decision stuck to it doggedly, right to its conclusion.

After hearing a young Soprano, she sets about making her life-long dream to play at Carnegie Hall in Manhattan, a reality. She hires a pianist, expertly portrayed by Simon Helberg (The Big Band Theory) and one of the world’s greatest vocal coaches (David Haig) and along with her Yes Man husband/manager played by a doting Hugh Grant, who pays off critics and audience members to enjoy Foster-Jenkins’ performances, Foster-Jenkins sets herself up for a mighty fall.

Once again Meryl Streep proves that her acting is all in the eyes. She plays the ageing Foster-Jenkins with a delicacy that is truly touching and shows how poignant an actor she is. Streep manages to bring  hilarity and tragedy into one role. As she flings herself into one of opera’s most demanding arias, the Queen Of The Night, she takes on a Patricia Routledge (Keeping Up Appearances) form, yet is able to truly showcase the depth of Foster Jenkins musings and sheer love of life and ‘anything is possible’ attitude. We could all learn a thing or two from Foster-Jenkins. Hugh Grant perfectly plays his usual suave, English highly impotent secondary character allowing Streep’s magnificent talent to shine through.

Directed by Stephen Frears and written by Nicholas Martin, this faithful retelling of the famous opera singer that never was, is a laugh out loud, poignant look back at a forgotten era.