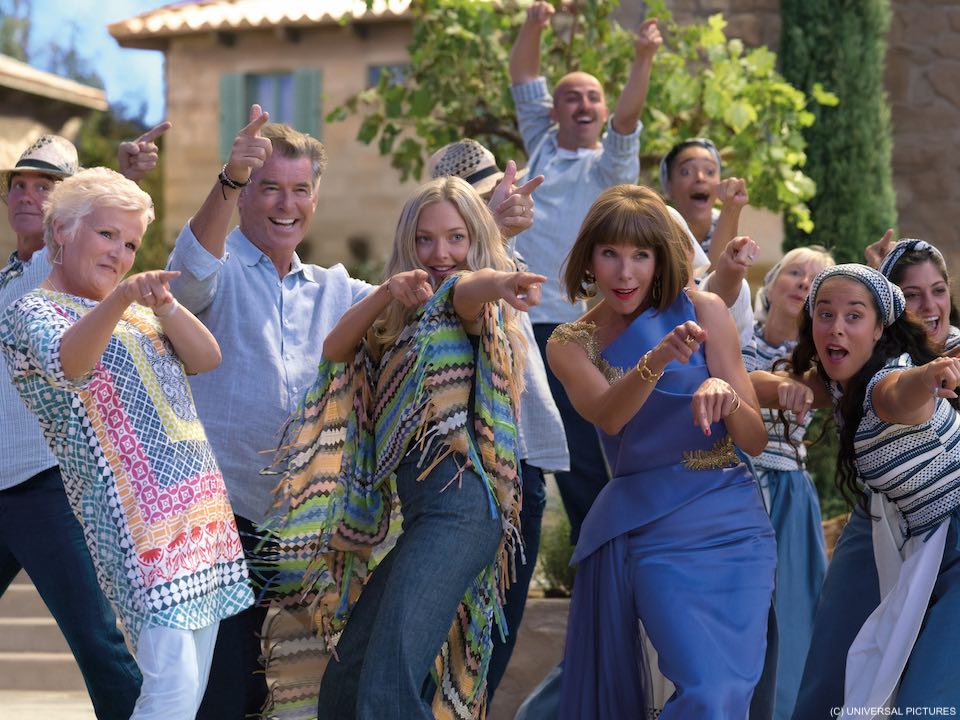 This should have been a car crash in all honesty but it is full on Formula 1 massive success.

MAMMA MIA: HERE WE GO AGAIN – The sequel and a much more accomplished movie to the 11th most successful film of all time. Everyone is back bringing you over 20 Abba songs and a much better story with added Cher class.

Nutshell – A movie released exactly 10 years after the first film tells us what the characters are doing also a decade on with parallel flashbacks to the origin story of Meryl Streep’s Donna character in the 80s from the first time around. So we get mother and daughter’s stories filled out and then grandmother Cher rolls in but its all about the tunes and we get some huge production numbers right from the outset with a vastly increased budget and Richard Curtis added to the writing team.
Running Time – 114 Minutes – Cert PG.
Tagline – ‘Thankyou For The Music Again’
The Gay UK Factor – Well we only have a couple of lines but this is as gay as Lady Gaga doing a Madonna medley at an Elton John used buttplug auction. It was the gays that took over Abba’s back catalogue about 8 years after they disbanded leading to the stage musical. We have kept them close to our glitter covered hearts since whilst Cher became queen of the gays straight after she climbed on board a battleship with 500 sailors in just her knickers belting out ‘If I Could Turn Back Time’ with a 40-foot cannon between her legs. It helps that two of the young leads in this movie are hotter than Tom Daley’s popper collection also.
Cast – Amanda Seyfried, Lily James, Meryl Streep, Cher, Dominic Cooper, Pierce Brosnan, Julie Walters, Andy Garcia, Colin Firth plus Benny & Bjorn from the greatest pop act of all time.
Key Player – This is a love affair to Abba and with the same production team as before much credit also needs to go to the brains behind it all Julie Kramer, Phyllida Lloyd and Richard Curtis. That said there is no question that the breakout performance here is that of Lily James (Baby Driver, The Darkest Hour, Cinderella) playing the young Meryl character she is a great actor and lights up the screen and boy can that girl sing.
Budget – $70 Million already made double that so, on to week two and the obvious second stage play.
Best Bit – 1.12 mins; With a great life-affirming opening number ‘When I Kissed The Teacher’ and two great bits at the end one which will make you weep and the other that will make you sing at the top of your voice there is plenty of high points here. Yet when the opening blast of ‘Dancing Queen’ hits at a real key moment you will be flying as high as a bird on the wing. Pure joy in a bottle.
Worst Bit – 0.18 mins; With any musical, you are going to get a couple of numbers which don’t work even the great Les Mis has that high pitched kiddie song. Here we get a rough as a dog’s ass version of ‘Kisses Of Fire’ but even that surpasses ‘Waterloo’ sung badly in a Napoleonthemedd restaurant sung by TV’s Hugh Skinner (ITV’s The Windsors & BBC’s W1A) and he makes Brosnan sound like Pavarotti on a good day here.
Little Secret – How popular are musicals at the moment? The Greatest Showman soundtrack just had the longest run at number one of 27 weeks for 51 years since Julie Andrews was spinning around on an Austrian hilltop. Now it’s been knocked off the chart summit by this juggernaut. Through Chicago, Frozen, Les Mis, Beauty & The Beast, La La Land etc. we cannot get enough of musicals and there are many more in the pipeline.
Further Viewing – Mamma Mia 1, Mermaids, Chicago, Phantom Of the Opera, Grease, Into The Woods, Evita, Dreamgirls, Summer Holiday, Blue Hawaii and the original beach musical classic South Pacific.
Any Good – If you are a fan you will lap this up if not, then go see the boy’s own Mission Impossible or Dwayne Johnson films instead. This is really great, it is better than the original, partly due to the fact that it can break even further away from its stage origins and also because it can pick lesser known songs which fit better rather than having to be a greatest hits and forcing them into a story whether they like it or not and yes ‘Money, Money, Money’ & ‘Chiquitita’ we are looking at you. This just works, will make you feel joyous for a day or two after you have seen it and many times more when you buy the CD and DVD by the millions.
This should have been a car crash in all honesty but it is full on Formula 1 massive success.
88/100