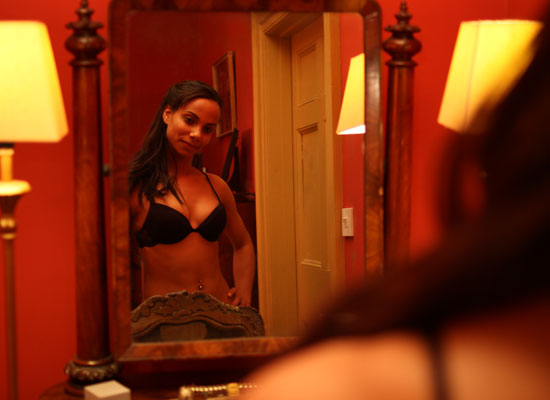 Maia is a model who finds her life in turmoil when a personal tragedy befalls her which severely impacts on her relationship with her husband.In an attempt to increase her self-esteem and to try and kick-start her career, she books a weekend with a prolific photographer, Francesca, in her secluded house in the remote Welsh countryside. But Francesca, who suffers from obsessive compulsive disorder, becomes increasingly fixated with Maia and tries to control her feelings towards her. But with a combination of guilt, paranoia and infatuation increasingly impacting on the relationship between the two of them, their past appears to be catching up with them.

The film stars Laura Martin-Simpson and Ione Butler as the two women whose physical and emotional relationship develops over the course of the film’s 90 minute running time. The story unfolds with long scenes of the two women in the isolated house and surrounding area spliced with some rather intense scenes of a man called Adrian talking frankly with his therapist about his self-awareness of his violence and his troubled marriage. Who this man is and his relevance to the two women is a mystery which feeds into the slow burn of the story.

The performances from the four cast members were all perfectly serviceable, with Jake Maskill as Adrian as the most notable. The direction of the film was functional, but never flashy or over-stylised and the scenery surrounding the house was a naturally beautiful backdrop.

One of the main problems with the film was that the characters were all so unlikeable that as a viewer, there was the potential to not share any empathy or connection with characters. Furthermore, the development of the story was far too slow, so that by the time the reveal arrived, any dramatic impact was lost given that the narrative had struggled to hold the attention.

Where the film does deserve some recognition is in its portrayal of the exploration of the female characters sexuality. Their intimate moment manages to steer well clear of tacky titillation and that aspect of the story is more about establishing their sexuality as one aspect of their complex characters rather than being the trait that their characters are built around.

Overall, the film is a slow watch, which some viewers may find rewarding, but one which, unfortunately, runs out of steam. It is a bold attempt at a low budget film noir, but never quite lives up to its potential.

The Adored is available to buy from Amazon and iTunes and further information about the film can be found on the films official website at http://www.theadoredmovie.com