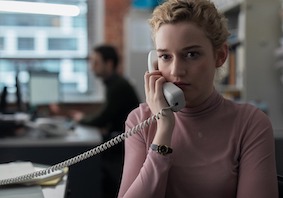 What happens if your boss is molesting women in his office, an office that is right behind where you sit?

This is the dilemma Jane (Julia Garner) faces in the new film The Assistant. Jane is an assistant to the chief of a film company (he’s never seen but his presence is felt throughout the film).

It’s Julia’s first real job in film and she’s kept busy doing a wide variety of tasks during the day; making coffee, keeping the office kitchen tidy, maintaining her bosses busy diary, managing visitors, dealing with his uncontrollable wife, and, handling the potpourri of women who float in and out of his office.

One of these young women, Sienna (Kristine Froseth), who has a lack of office skills, was hired by the same boss for reasons that are obvious. But when Julia appears to have had enough, she goes to HR to complain, but the HR director, who annoyingly takes a personal phone call during their meeting, tells Jane to keep her head down and focus on her role, and that she’s got a great opportunity. He lays into her that to file a claim against her boss would just wreck her career. Meanwhile, her male co-workers (Jon Orsini and Noah Robbins) seem to be oblivious to the shenanigans of their boss.

The release of The Assistant coincides with the jailing of Harvey Weinstein – it couldn’t be better timing. Garner is brilliant, but the takeaway of this film is her boss, not at all seen in the film but felt enormously throughout.

Writer and Director Kitty Green has written and directed a powerful film that perfectly highlights what the Me Too movement is all about.