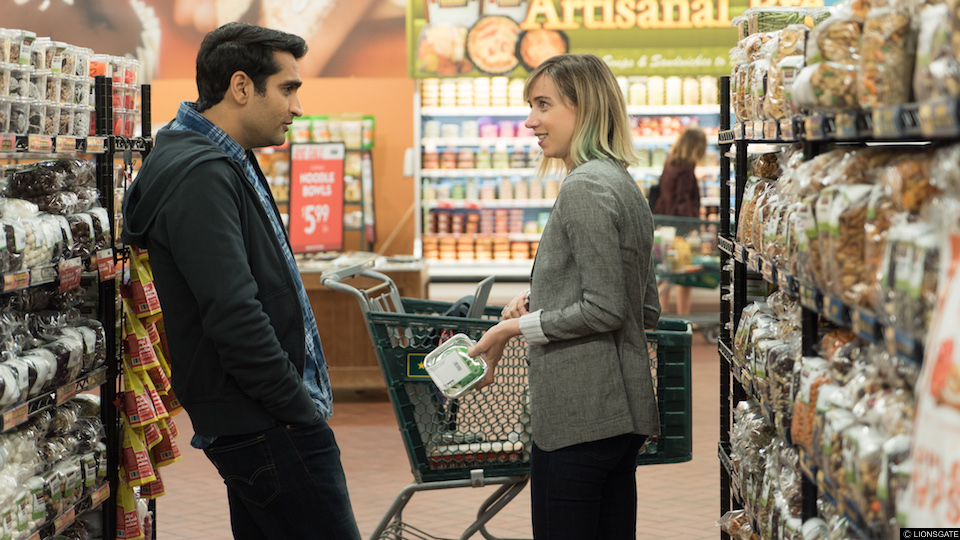 An unusual romance blossoms between a Muslim comedian and a white American woman in the new light-hearted comedy The Big Sick.

The not funny title is completely intentional because halfway through the film Emily (Zoe Kazan) gets really sick and falls into a coma. But before this, we see the beginnings of a romance (and the breakup) between her and aspiring comedian Kumail (Kumail Nanjiani). Even though they come from two totally different backgrounds, they fall head over heels with each other after Zoe heckles him at one of his shows. But it’s when Zoe is diagnosed with a mystery illness, and after they break up, that Kumail decides that he really wants to be with Zoe, but he’s got to share her hospital room with her parents (Holly Hunter and Ray Romano, who are both excellent). Meeting her parents for the first time in the hospital tests him and his love for Zoe, but it’s also her parents who have to do some soul searching themselves because they are not quite yet able to accept a Muslim man as their only daughter’s boyfriend. And to make matters worse for Kumail, his family insists he marry a Muslim girl with his mom constantly inviting single Muslim women over for dinner and tells Kumail that ’they happen to be in the neighbourhood.’ Kumail has lots of dilemmas in his life.

The Big Sick is the true life story of Kumail and his real life wife (Emily V. Gordon), who had become very sick when they were dating, and this is where the story of this film comes from (they co-wrote the script together). Directed by Michael Shwalter, The Big Sick is a very funny and light hearted comedy that will tug at your heartstrings. And it’s Nanjiani (from television’s Silicon Valley) who lays his heart out and lets us in on his real life relationship that has now been turned into a very good romantic comedy.

Available to order from iTunes and Amazon